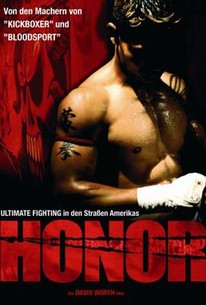 Two street warriors come to understand that not every battle is fought for money or power in this gritty urban action thriller featuring Jason Barry, Russell Wong, and "Rowdy" Roddy Piper. When street gangs clash with the local police in a series of bloody battles, neighborhood friends Raymond and Gabriel are forced to choose sides. In the ensuing brutality, Raymond is plunged into the cold confines of prison as Gabriel is forced to fight a vicious war on foreign soil. Later, when Raymond and Gabriel arrive back in their old neighborhood, the two soldiers put their survival skills to the ultimate test as they struggle to maintain their honor in a city where life is cheap and death comes fast.

There are no critic reviews yet for Honor. Keep checking Rotten Tomatoes for updates!