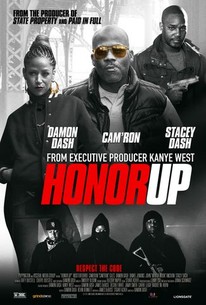 Michael Rispoli
as Victor
View All

Critic Reviews for Honor Up

A criminally inept throwback to '90s urban gangsta movie posturing that plays like a stone-faced version of the 1996 Wayans brothers spoof, "Don't Be a Menace to South Central While Drinking Your Juice in the Hood."

For all of its failings, the movie sometimes manages to bring a scary whiff of the street into its sounds and images.

Audience Reviews for Honor Up

There are no featured audience reviews yet. Click the link below to see what others say about Honor Up!