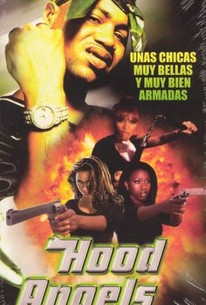 Three wrongly-convicted beauties get a second chance at freedom when a powerful attorney enlists their aid in investigating the death of a popular rap star in this action effort from director Paul Wynne. Traci, Felicia, and Cinnamon have been framed for crimes they did not commit. When star attorney Larry Abrams agrees to take their cases in exchange for some help with a high-profile investigation, the ladies are quick to take him up on the offer. Popular rap artist Nitro Jones (Juvenile) has been murdered, and the killer is still at large. As the lovely ladies go undercover at Insynchro Records to ferret out the persons responsible for Nitro's death, they must avoid a series of increasingly dangerous traps while piecing together the clues that will draw out the murderer. When the secret of Nitro's killer is finally revealed, the repercussions within the music industry shake the world of rap music to its very core.

There are no critic reviews yet for Hood Angels. Keep checking Rotten Tomatoes for updates!

There are no featured reviews for Hood Angels at this time.