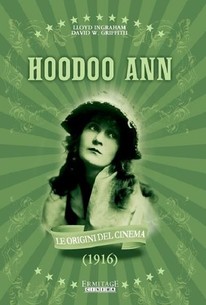 Though officially directed by Lloyd Ingraham, the delightful Hoodoo Ann was for all intents and purposes a D.W. Griffith film. Griffith not only served as producer, but also wrote the screenplay under the pseudonym "Granville Warwick." Mae Marsh plays the title character, an orphan girl who is convinced she is a jinx. An old black maidservant tells Ann that she will continue to be a "hoodoo" until the girl finds herself a husband. Ann's subsequent romance with young Jimmie Vance (Robert Harron) seems to lift her self-imposed curse, though things look bleak for a while when our heroine apparently shoots and kills the grumpy old man next door! (She doesn't, of course). Beyond the charming performance by its leading lady, Hoodoo Ann was highlighted by a hilarious sequence at a small-town movie house, where hero and heroine are thrilled by the exploits of a steely-eyed cowboy star, played in mock William S. Hart fashion by Carl Stockdale.

Mae Marsh makes Hoodoo Ann a picture well worth seeing. It is diverting and enjoyable entertainment.

There are no featured reviews for Hoodoo Ann at this time.