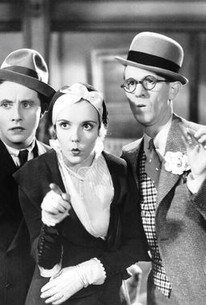 The comedy team of Bert Wheeler and Robert Woolsey made their fourth film appearance of 1930 in the hectic comedy-melodrama Hook Line and Sinker. This time the boys are cast as itinerant insurance salesmen Wilbur Boswell and J. Addington Ganzy ("Not Pansy -- Ganzy, with a 'G'"!) After talking their way out of a traffic ticket, Wilbur and Addington make the acquaintance of penniless socialite Mary Marsh (Dorothy Lee), who is fleeing a wealthy marriage arranged by her mother Rebecca (Jobyna Howland). Falling in love with Mary himself, Wilbur talks Ganzy into helping her renovate a seedy hotel willed to her by her uncle. With the dubious aid of a decrepit bellboy (George F. Marion) and a nutty house detective (Hugh Herbert), the boys turn the hotel into a thriving enterprise. The plot thickens when a gang of jewel thieves and a band of bootleggers register at the hotel, followed in short order by Mary's mother and the girl's prospective fiance, lawyer John Blackwell (Ralf Harolde) -- who happens to be in league with the bootleggers! A wild gangland shoot-out and nocturnal chase caps this dated but amusing Wheeler and Woolsey vehicle.

William B. Davidson
as Frank Dukette

Edna May Oliver
View All

There are no featured reviews for Hook, Line and Sinker at this time.