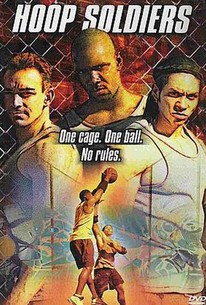 Shay (Tank) is the leader of the Hoop Soldiers, one of the inner city's fiercest competitors in the secret indoor sport of caged three-on-three basketball, a game that is played with no rules. Punches and kicks are permitted by opponents as they struggle to slam dunk their way into a slimy crime boss' good graces. Bright and beautiful Rochelle Moore (Cassandra King), a video game designer on the brink of national success, infiltrates the netherworld of caged basketball, becoming friends with Cal (Jerome Green), one of the gangsters who runs the illegal betting operations. Cal, of course, would like the relationship to go further, until he learns that Rochelle has reported the game to the police. During the big game, Shay learns Rochelle is in danger and has to rescue her -- and win the game -- before it's too late.

There are no critic reviews yet for Hoop Soldiers. Keep checking Rotten Tomatoes for updates!

There are no featured audience reviews yet. Click the link below to see what others say about Hoop Soldiers!