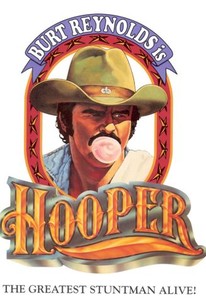 Following the blockbuster success of Smokey and the Bandit, Burt Reynolds, Sally Field and director Hal Needham reunited to make the very similar Hooper, an action-laced comedy about a Hollywood stunt man who enters a dangerous rivalry with a younger stunt man. Hooper (Reynolds) and the younger stunt man (Jan-Michael Vincent) compete in a series of increasingly complex stunts in order to earn the title of "the greatest stunt man alive." Hooper is lightweight, mindless fun that doesn't have much story, but it is a stronger film than Smokey and the Bandit, largely because the characters are somewhat stronger. Everyone involved looks like they're having fun; the good-humor translates on screen.

Hal Floyd
as Cliff
View All

With this film, Needham demonstrates conclusively that he is far more than simply a spirited action director, eliciting beautiful performances from every member of his large and carefully chosen cast.

People have been mentioning Burt Reyolds and Clark Gable in the same breath for several years now. With Hooper, Reynolds has finally justified the camparison.

Individually, the performances in this story of three generations of Hollywood stuntmen are a delight. And Hal Needham's direction and stunt staging are wonderfully crafted.

Director Needham (an ex-stuntman himself) slips effortlessly into a lightweight satire of the movie biz and an almost Hawksian action-comedy of male-group professionalism.

Mr. Reynolds has made a movie to please fans of all persuasions, and to please them a great deal.

A lot of people and things are variously punched and smashed, and a good time is had by all.

One of the least offensive Needham-and-Reynolds efforts, but that isn't saying much.

A highly entertaining tribute to Hollywood stuntmen. The best of the Burt Reynolds-Hal Needham collaborations.

Guilty pleasure stunt-guy flick. Worth it for the final stunt of the film.

Director Needham had graduated from being a stuntman to direct Smokey and the Bandit, but you would have to dig deep to find any great insight into the trade.

At a certain point, many of these Burt Reynolds movies tend to blur into one. The constant use of Pontiac Firebird Trans Am's and the fact he's actually wearing another Firebird jacket (silver this time), just like in 'Smokey 2'. Yeah I get the fact the Firebird was a top American muscle car back then but with Reynolds behind the wheel, you could be watching any number of movies! The plot revolves around Reynolds as the titular Hooper, supposedly the greatest Hollywood stuntman alive. Alas old Hooper is getting old, too many crashes and too many painkillers are taking their toll on Hooper. His girlfriend (played by real time girlfriend Sally Field, probably why she's in the movie) is also fed up with Hooper's dangerous career and wants him to quit. Then along comes a much younger, fitter stuntman (Jan-Michael Vincent) who kinda challenges Hooper's position, naturally a friendly yet intense rivalry grows between them as they try to out perform each other. This eventually culminates in the chance to pull off the greatest stunt ever on the movie they are working on. Its extremely dangerous but the pay is huge, thing is, no one thinks they can do it. Hooper's bird doesn't want him to, the doc doesn't want him to, but the movies director is demanding they do it. Is it worth risking their lives for? This movie is directed by none other than Hal Needham, a good friend of Reynolds (if you couldn't tell). The story is actually loosely based around Needham's early career as a stuntman in Hollywood. 'Hollywood's greatest stuntman'? that's the films tagline on the poster, so did Needham kinda have a rather overinflated opinion of himself? or was he really that good? So if we're really honest here, the movie is just an excuse for lots and lots of stunts utilising many stuntmen in the biz. It is a comedy in case you were wondering, its not a heavy drama or anything. Its your usual slapstick affair with Reynolds doing what he does best...drive Trans Am's (did he have a sponsorship deal or something?). As you can imagine the tomfoolery on display in this movie is predictable and hokey. Pretty much every basic stunt you can think of is thrown on the screen, by real stuntmen, not Burt, although he does do the odd bit and was quite athletic back then. You got guys being thrown through windows, bar fights, horse riding, falling off horses, swinging from buildings, falling from heights, flipping cars, jumping cars, explosions, toppling buildings etc... The grand finale is a whopping sequence featuring Hooper and Ski's car trying to escape a small town set whilst it crumbles down around it. The guys must navigate a gauntlet of destruction evading explosions, falling buildings, other cars, people running around etc...and make it to a bridge which ultimately collapses. There they both attempt the huge dangerous stunt of jumping the car over the collapsed bridge (335 feet). This sequence is worth the wait as it shows many solid stunts, nothing that will blow you away these days mind you, but still dangerous well timed stunts. The best being a huge factory chimney falling down with the car just racing past underneath before it hits the ground. The actual final big leap does look good for the most part but it cuts before we see it reach the other side, so I have no idea if that stunt was actually completely successfully. The movie is ultimately about the camaraderie between Hooper and his band of stunt mates (Reynolds realtime coworkers). Its uplifting and cute for sure, but hammy as hell, as is Reynolds ladies man image which is always a part of his characters and kinda cringeworthy. Never really sure if he is just playing that image up or he genuinely thinks he's a charmer. Reynolds also manages to break the forth wall here yet again, as he has done on many of his car comedy movies. Its like a massive overlong episode of 'The Dukes of Hazzard' (James Best is here after all), or just more hijinks from The Bandit. Or, more accurately, a movie about how Hal Needham and co go about making their proper stunt filled extravaganzas, almost like a sly behind the scenes. However you look at it, it is a fun ride at times, Reynolds is clearly having a blast with his car obsessed team of Hollywood regulars, but that doesn't disguise the fact it is completely unoriginal. Yes the tale of a stuntman based on a real person is relatively fresh, but what we actually see is just more of what Reynolds has done before, with the same people (in the same cars!). Oh and the movies title/wording on the poster looks like an actual beer companies logo.

Just another "Burt Reynolds" movie. Let's see: Sally Field, a Trans Am and lots of Coors beer. If you were a fan of "The Fall Guy" TV series with Lee Majors, you can probably thank this movie for it's inspiration.

I shouldn't like this story of movie stunt drivers, but I did.