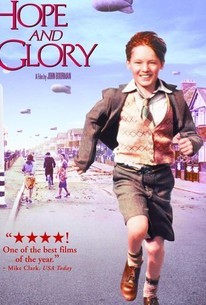 Director John Boorman pulled a few stylistic pages from Chabrol and Fellini for the intensely autobiographical Hope and Glory. The film is set in London during World War II; we see all through the eyes of Boorman's alter ego, 9-year-old Billy (Sebastian Rice-Edwards). Though surrounded by the horror and tragedy of the war, Billy adopts a child's objectivity, viewing the passing parade in wonder rather than terror. After his family's home is destroyed, Billy is given a different perspective on life when he is evacuated to his grandfather's idyllic country home. Sarah Miles co-stars in Hope and Glory as Billy's mother, while director Boorman's son Charlie portrays a German paratrooper in the now-famous scene where dozens of London women converge to cut precious chunks of silk from the German boy's parachute.

John Boorman
as Narrator
View All

Critic Reviews for Hope and Glory

Hope and Glory is an enormous success right now in England, where every frame must have its special memories for British audiences. Through American eyes, it is a more universal film, not so much about war as about memory.

A so interesting film that intelligently draws a thorny terrain, that of mixing tragedy, based on a real dramatic event such as a great war, and fable. [Full Review in Spanish]

..a mixture of farce, tragedy, and boredom in the face of a vague, unknowable existential threat.

Nostalgic look at London during WWII has sex, mature themes.

The precision of the characters and the performances that John Boorman draws out of his actors make this a pleasure even when when it's a bit pokey and aimless.

The Blitz as a comedy: Director John Boorman offers a warmly nostalgic view of his childhood in a London suburb during WWII.

Both serious and funny, with typically dry British humor offsetting the heavy wartime emotions of fear, anger, sorrow, and need.

A wonderful and touching story about life during wartime.

One of Boorman's best, most personal films.

A classic chronicle of civilian life during wartime

Audience Reviews for Hope and Glory

Simply one of the best growing up movies out there. Stands the test of time.

Time has only strengthened the appeal of this minor masterpiece. If you liked it 25 years ago you'll absolutely love it now.

War time movie about a boy and his family during the London blitz. The Germans bomb London during the World War II, families homes are destroyed, neighbours die and people are displaced. Even with the war around them, they find time for family, fun and celebrations.

A very moving, funny and thouching look at a young boys life in England during World War II. I loved this film immediately upon first viewing and having enjoyed it everytime that I have watched it since.