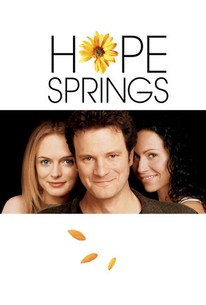 Not a sequel to 1998's Hope Floats, Hope Springs is a romantic comedy based on the 2001 novel New Cardiff, the first new book in over 20 years by Charles Webb, author of The Graduate. Directed and written for the screen by Mark Herman (Brassed Off), the film stars Colin Firth as lovelorn British artist Colin Ware. After being left by his fiancée Vera (Minnie Driver), Colin takes to sulking about in a small Vermont hotel run by Joanie Fisher (Mary Steenburgen). When Joanie becomes aware of Colin's broken heart, she decides to match him up with a local woman named Mandy (Heather Graham). But just as romance begins to ensue between Colin and Mandy, Vera suddenly pops back into the picture with intentions of rekindling her relationship with Colin. Oliver Platt heads up the supporting cast that also includes Frank Collison and Chad Faust.

June B. Wilde
as Mrs. Golfer

Kathryn Kirkpatrick
as Tina the Cleaner

A date movie that's well worth making a date with.

Somehow it can't make the leap from an enjoyable light film to a movie to remember.

Firth, who is one of the best of the rom com actors out there, eventually crashes into the film's multitude of shortcomings

Hope Springs went straight to video after being savaged by critics and audiences in the UK, and that's about where it belongs.

...remains engaging primarily due to the charismatic performances and director Mark Herman's breezy approach to the material...

Ultimately it's the wholly unbelievable -- and frankly, impossible -- story that makes Hope Springs fail to work in virtually every scene.

We see a relationship that doesn't seem to have any reason for being, or even any joy.

I picked up an ex rental for $2, and I think I still paid too much. I usually don't mind Heather Graham's rom coms, even the silly ones, but this was just crappy. Wtf with her getting drunk in the car and then taking off all her clothes. It was like watching a special needs person. Also, the sound on the dvd is atrocious. The music is much louder than the speaking, so I had a choice between keeping the volume low and not being able to hear all that was said, and keeping it high and having music blast out loudly - as in, neighbours will complain, loudly. I lasted 40 minutes. Just long enough got Minnie Driver to show up. It's a pity she and Colin didn't just go home at this point and end the movie.

I am a fan of both Colin Firth and Minnie Driver. This is not my favorite film but it is funny and worth seeing. Colin plays an artist whom lives in England with his love (Driver). When she leaves him Colin decides to have a big change by moving to New England. While staying there he encounters many ineresting characters such as the hotel's owner (the wonderful Mary Steenburgen)and her husband. At the same time he meets a beautiful off the wall lady (Heather Graham). Will home call him back to his 1st true love or stay in the states is for you to find out.