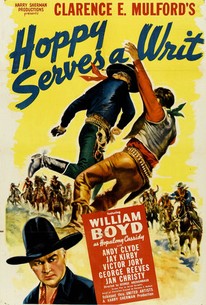 Best known today as Robert Mitchum's screen-acting debut, this fine entry in the long-running Hopalong Cassidy series features the silver-haired hero (William Boyd) as a Texas lawman posing as a gambler in order to track down a gang of highwaymen and cattle rustlers who have found refuge in lawless Oklahoma Territory. Although quickly identifying scar-faced Tom Jordan (Victor Jory) as the leader of the gang, Hoppy has no jurisdiction in the territory and is forced to lure the gang back to Texas. Hoppy Serves a Writ was the final series entry based on an original story by Clarence E. Mulford, the creator of the "Bar 20" novels.

A wee bit stronger than most of Hoppy's bland B Westerns.

There are no featured reviews for Hoppy Serves a Writ at this time.