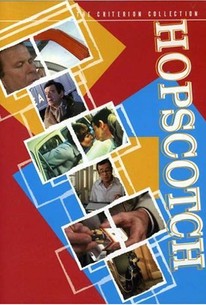 Walter Matthau plays a CIA agent who's been confined by office politics to a desk job. The disgruntled Matthau quits the service and heads to Europe, where he links up with former lover (an fellow ex-agent) Glenda Jackson. All goes smoothly until Matthau acts on the advice of yet another retired agent, Russian Herbert Lom, who suggests that Matthau write a tell-all autobiography. Spitefully, Matthau sends out copies of his first chapter to the heads of the CIA agencies throughout the world--and from that point on, he and Jackson don't have a moment's peace. This delights Matthau: now that all of his former colleagues are chasing after him, he has a reason to get up in the morning. As written by Brian Garfield, Hopscotch was a conventionally serious espionage novel. As adapted for the big screen by Garfield and Bryan Forbes, Hopscotch is a lively exercise in cloak-and-dagger comedy, even when the pursuit of Matthau turns deadly towards the end.

Shan Wilson
as Spy in Octoberfest

Now Streaming: The Theory of Everything,The Great Beauty, and More

Matthau is laconic yet charming, and he comes dangerously close to letting us know how cute he is.

The plotting is seamless, the humor to the point, the cinematography serviceable and direction craftily precise.

It's strictly superficial stuff that works as well as it does in the playing because the cast is far more skilled than anything they are asked to do.

A consummate actor whose talents have not been exploited by Hollywood as ably as they should have been, Matthau this time around gets to employ a whole bag of his theatrical tricks, his wry and his sly expressions, and he's great.

An extremely satisfying confection that derives most of its juice from yet another superlative Walter Matthau performance.

At moments... "Hopscotch" stumbles, but Matthau's low-key, but playful characterization always gets it back on track again.

Director Ronald Neame has done a competent job, made a pleasant enough piece of cake, but whether you'll appreciate it depends on whether or not you consider hopscotch child's play.

Rather than being entertaining, the movie is irritating. [Full Review in Spanish]

Bond on valium? This game of Hopscotch is a low-key but entertaining affair.

Rich Cline
Shadows on the Wall
View All Critic Reviews (30)

Though it's aged a bit awkwardly in an era where espionage films are expected to deliver thrills, Hopscotch remains an amusing comedy bolstered considerably by the presence of Walter Matthau.

Its all very silly, but still entertaining. I can't help but enjoy something that makes our intelligence organizations look like a bunch of bumbling idiots. Matthau is great, as is the score which consists of random Mozart, Puccini, and Rossini selections.

Half boring, and half funny. This movie isn't really worth watching unless you're a fan of Landau. The story is kind of silly, but it's okay.

Okay caper suffers from miscasting of Matthau in the lead, his action are just too slow for him to be convincing as a man of stealth. Glenda is wasted in a nothing part.