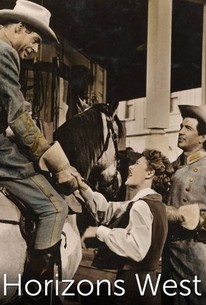 Set in the years following the Civil War, Horizons West stars Robert Ryan as Dan Hammond, one of three Texans who decide to return home after the cessation of hostilities. While his brother Neal (Rock Hudson) and his friend Tiny (James Arness) decide to become ranchers, Dan opts for a more adventurous life out West. Through means both fair and foul (mostly foul), he builds up a veritable empire, defending his turf with legions of hired gunmen. Eventually, the honest Neal is forced to face down his brother Dan, whose megalomania has reached dictatorial dimensions. Julie Adams, still billed as "Julia," plays a self-reliant widow who sets her cap for Dan, who in an earlier scene had gunned down the woman's husband (Raymond Burr)--a characteristically ironic grace-note from director Budd Boetticher.

Forbes Murray
as Another Player
View All

Boetticher's color cinematography is certainly above average, and he does manage a few interesting shots here and there, but he seems stuck in the limitations of the story and the numerous interior shots.

Not even the nightclub comics who make fun of movie dialogue have often dreamed up cornier stuff than some of the chitchat in this pretentious western.

Script is too plaintive.

Standard western is lifted above the norm by its cast. Above the title stars Robert Ryan and a very young Rock Hudson do well as brothers pitted against each other and the great Julie Adams, while pretty much wasted again, looks great and does what she can with the little handed to her. Where this really stands out is the supporting cast especially for classic TV lovers. Where else will you find Marshall Dillon, Perry Mason, McCloud and Aunt Bee as well as many other familiar faces all in one movie.