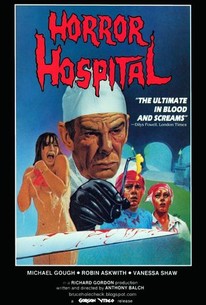 This gory British horror satire features a hammy Michael Gough as Doctor Storm, the demented overseer of a bizarre health resort advertising "Hairy Holidays" for teenage hipsters -- on whom he secretly performs diabolical mind experiments, turning them into mindless automatons directed by a remote-control device. Those lucky enough to escape the doctor's operating table are invariably tracked down by a leather-clad bike gang or decapitated by the doctor's car (thanks to handy fender-mounted scythes). Into this trap falls pop music star Robin Askwith, whose quest for a stress-relieving getaway lands him in Gough's house of horrors. Oblivious, at first, to his impending fate (thanks to the diverting presence of the doctor's pretty niece, Vanessa Shaw), Askwith eventually realizes that the fellow patients look just a bit too relaxed for comfort. Ostensibly the blackest of black comedies, some aspects of the film actually presage Lindsay Anderson's far more sophisticated Britannia Hospital, though the satire here is far less intelligent. The biggest laughs are provided by the badly dated, ultra-mod '60s clothing and dialogue.

It's great to have Horror Hospital back in form. The flick plays like a time capsule of a time when love was free, gore flowed like a river, and filmmakers weren't afraid to go too far.

When Jason a member of a 60's pop group decides he needs a break from everyone he heads out to a country retreat which promises big changes in the way he feels in no time at the train station he meets Jidy who just happens to be going to the same place as her Aunt Harris runs it with her husband Dr Storm but once these two get there they find out somethin much more sinister is going on at this hospital then well rest now the two must try and get away before its too late. This is one of those really good horror movies that needs to be seen to believe its sorta on the cheesy side but has major cult movie potential and i would recommend this to most horror movies.