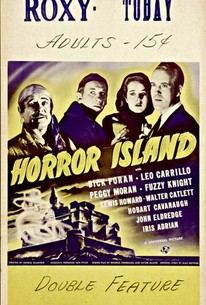 It has been alleged that Horror Island was the least expensive of Universal's 1940s horror films. While it certainly looks that way, it remains an enjoyable outing from fade-in to fade-out. In the tradition of "Ten Little Indians", a group of disparate types are lured to a supposedly haunted mansion on a remote island. Their "host" is peg-legged privateer Tobias (Leo Carrillo), who possesses half of a valuable treasure map. One by one, the treasure-hunters are killed off by a mysterious assailant, with Tobias the first victim. The identity of the "mystery" killer is fairly obvious from the outset, though the screenplay cheats a bit by rendering the villain helpless during one of the murders. Of the stellar all-character-actor cast, Iris Adrian shines as a leather-lunged blonde, alternating between wisecracks and shivers throughout the film's brisk 61 minutes.

Foy Van Dolsen
as The Phantom

Emmett Vogan
as The Stranger
View All

This one benefits from bright performances, a breezy pace, and a surprising denouement.

Atmosphere makes up for much, as does the Hans Salter score, a clever script with bright dialogue and a first-rate cast.

There are no featured reviews for Horror Island at this time.