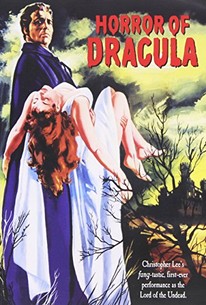 Critics Consensus: Trading gore for grandeur, Horror of Dracula marks an impressive turn for inveterate Christopher Lee as the titular vampire, and a typical Hammer mood that makes aristocracy quite sexy.

Critics Consensus: Trading gore for grandeur, Horror of Dracula marks an impressive turn for inveterate Christopher Lee as the titular vampire, and a typical Hammer mood that makes aristocracy quite sexy.

Critic Consensus: Trading gore for grandeur, Horror of Dracula marks an impressive turn for inveterate Christopher Lee as the titular vampire, and a typical Hammer mood that makes aristocracy quite sexy.

This Hammer Studios classic is far closer to the letter (and spirit) of the Bram Stoker novel than the Bela Lugosi version of Dracula. The premise finds the infamous count journeying from his native Transylvania to England, where he takes a headfirst plunge into the London nightlife, and begins to rack up victim after victim. In the process, Dracula also runs into his arch-nemesis, Van Helsing (Peter Cushing), which ignites a battle of wills between the two. Heavily censored in Britain when released (with the goriest moments truncated), this outing was restored by the BFI in the mid-late 2000s. It put Lee and Cushing on the map and paved the way for many sequels starring the two, and for many non-Dracula follow-ups with these actors as well.

Geoffrey Bayldon
as Porter
View All

Critic Reviews for Horror of Dracula

Unlike most of Hollywood's quickies, Horror of Dracula has allocated time, thought and talent to an enterprise which successfully recaptures the aura and patina of yesteryear's Middle Europe. Some of the photography is good enough to frame.

Altogether this is a horrific film, and sometimes a crude film. but by no means an unimpressive piece of melodramatic story-telling.

This Hammer classic will be good for a laugh, and some shivers.

This Grand Guignol treatment bowled people over in the 50s, and it still yields some potent shocks.

Christopher Lee's Dracula is a menacing and complex presence who never lets his fangs and cape dominate.

It may have slipped from an X rating to a 12A but this is still a potent adaptation of Bran Stoker's eternal monster.

The Hammer Dracula is every bit the classic now as it was back in the 50s and is still the version I mentally refer back to when I see a reference to the classic tale.

Not only Hammer's first take on the Bram Stoker classic, but undoubtedly its finest.

Of all the Dracula horror pictures thus far produced, this one, made in Britain and photographed in Technicolor, tops them all. Its shock impact is, in fact, so great that it may well be considered as one of the best horror films ever made.

A film which the passage of the years has managed to put in its place as one of the best horror titles of all time. [Full Review in Spanish]

Morbid and ghoulish though it is, the picture at least has the merit of taking its hideous story quite seriously.

A mesmerizing achievement from start to finish.

Audience Reviews for Horror of Dracula

It's difficult to overestimate the significance of Dracula. Far more so than its predecessor, The Curse of Frankenstein, it set the tone for Hammer's movie output over the next two decades - the two decades (1956-1976) when British films, or at least British horror films, were among the best, most admired and most imitated in the world. A far cry from the terribly English whimsy of the Thirties and Forties, or the provincial, "arty" stuff that's predominated since the end of the Eady levy in the 1980s. With this movie, Hammer not only created an international star out of Christopher Lee, but a worldwide phenomenon that persists, in series such as Buffy the Vampire Slayer and films like Sleepy Hollow, to the present day. Taking the Kensington gore quotient of The Curse of Frankenstein, and combining it with an unprecedented dose of eroticised violence, Dracula revolutionised horror, ultimately leading to the breasts and blood exploitation movies of the Seventies, as well as the heavy sexual overtones of films such as Alien and The Company of Wolves. The movie benefits from two astonishing central performances. Christopher Lee's Dracula is a creation of passionate intensity, to whom Cushing's monomaniacal Van Helsing is the antithesis - fire and steel; hot-blooded animal instinct versus cool scientific rationalism. This has led some critics to identify Van Helsing as the real villain of the piece, a brutal fanatic who coldly pounds a stake through the vampirised Lucy. Either way, both actors give supremely effective performances. The final confrontation between the two remains the single most iconic scene in any Hammer film. Hardly surprising, given their on screen charisma, that Lee should reprise his role six times and Cushing four. The most influential British movie of all time, Dracula's electric mix of sex and death fuelled a global revolution in genre film-making, and presented Hammer with a formula that they would return to again and again over the next two decades.

This was the first film in Hammer's series devoted to updating Dracula, making variations that, unlike Universal, were filled with a bit more mature content such as blood, cleavage, and being in color. This film follows the basic story as created by Bram Stoker, but of course takes plenty of liberties. The result though, is a very entertaining and gothic take that I actually enjoy a tad more than the Bela Lugosi Dracula, mostly because this one, despite a couple of slow patches, doesn't really come off as boring like the Universal film did. Yell at me all you want, but that's how I feel. Christopher Lee maybe speaks like 17 lines during the movie, all of them to John Van Eyssen's Jonathan Harker, and all within the first like 15 minutes or so. The rest of the time he's a silent (save for some grunts or snarls) suave badass with some killer red eyes and one of the coolest "don't mess with me" faces ever. He's a joy to watch. Another good performance comes from Peter Cushing as the classic nemesis Dr. Van Helsing. He's the guy who knows something's up, and is bound and determined to put things right. The film has a great look, Terence FIsher provides competant direction and, though some of the effects look a little dated and cheesy, they're still pretty cool. You might think that if you've seen on take on Dracula, then you've seen them all. Well, even though that's sorta true, you should give this one a watch, if only for the awesomeness that is Christopher Lee.

Hammer's first Dracula movie. It's really very cool, it's slow and atmospheric, but Lee is so perfect as Dracula, I loved him.