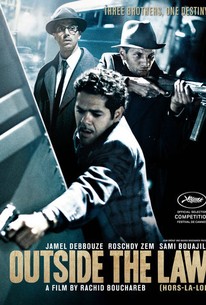 Outside the Law (Hors-la-loi) Photos

After losing their family home in Algeria, three brothers are scattered across the globe. Messaoud joins the French army fighting in Indochina; Abdelkader becomes a leader of the Algerian independence movement; Saïd moves to Paris to make his fortune in the shady clubs and boxing halls of Pigalle. Gradually, their interconnecting destinies reunite them in the French capital, where freedom is a battle to be fought and won.-- (C) Official Site

News & Interviews for Outside the Law (Hors-la-loi)

View All Outside the Law (Hors-la-loi) News

Critic Reviews for Outside the Law (Hors-la-loi)

Bouchareb is not, as Pontecorvo was, a political film-maker. He's a humanist with a strong feeling for personal tragedies and people caught up in the tides of history.

There is no doubt where Bouchareb's sympathies lie but his attempt to marry a political lesson with the structures of an action movie doesn't always work. Current events give his argument renewed force, however.

It's overlong and a little over-indulgent, but given current events in north Africa, there's an unanticipated resonance to it.

A self-consciously epic historical drama about the road to Algerian independence from France in 1962.

A tiring, didactic manipulation of history.

That every political issue is covered from race to poverty to French oppression only makes the dish, like a pizza with an overcrowded topping, harder to keep piping hot.

... a taut, epic story of three brothers whose lives unfold during the struggle for Algerian independence from France.

The story here is a grand one. But it is painful as well. I guess freedom always is.

Ultimately, the common criminal has as much in common with the career soldier and the idealistic revolutionary . . . .

Outside The Law is a fairly run of the mill slice of historical action/crime-drama, but ironically one that has just enough story to sustain your attention, but all too little historical fact to truly deserve your it to begin with.

Part Western, part Godfather and with topical reflections of French colonialism meeting contemporary struggles for freedom in north Africa head-on, this is a thought-provoking film despite its over-ambitious nature.

Audience Reviews for Outside the Law (Hors-la-loi)

"Outside the Law" starts on May 8,1945 as France celebrates its victory in World War II by brutally repressing a peaceful independence march in Algeria. This interrupts the boxing match promoted by Said(Jamel Debbouze) while his brother Abdelkader(Sami Bouajila) somehow barely escapes with his life with an Algerian flag before being arrested and sent to prison in France. Messaoud(Roschdy Zem), another brother, ends up in the French army where he gets to be lectured by the Vietnamese in a prison of war camp on the right way to overthrow his colonial masters. Their mother(Chafia Boudraa) is not so much interested in any of that, as she is in possible grandchildren. In depicting the violent struggle for Algerian independence, "Outside the Law" is as subtle as an explosion. Its main problem is in never going deeper than the historical record in sounding like a doctrinaire debating society at times when instead it should have been more interested in developing the various characters, especially as how they might have been affected by the casual racism of the era. Admittedly, the movie does improve as it goes on, and there is a nice subplot involving Abdelkader. Otherwise, what you basically have here is an old fashioned gangster flick with the FLN vs. MNA vs. the French authorities. This could not have been the intent of the filmmakers, could it? I mean I know the Algerian independence movement was baptized in blood but nobody asked if there could have been a better way?

Director Rachid Bouchareb follows up his 2006 Academy Award nominated "Days of Glory," with yet another masterwork of cinema. I think this is an even better film than "Days of Glory" aswell.

Outside the Law (Hors-la-loi) Quotes