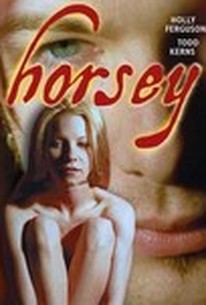 Writer-director Kirsten Clarkson's exploration of the art world and music scene was made with a rock-bottom budget but much high energy. After artist Delilah Miller (Holly Ferguson) makes the mistake of latching onto irresponsible rock musician Ryland Yale (Todd Kerns), spoiled offspring of a wealthy family, their affair goes progressively downhill. Delilah is hooked on Ryland, and Ryland is hooked on heroin. There must be some way outta here, and soon Delilah finds Jesus as a solution. She also looks up her former female lover, Lily Hiroshima (Victoria Deschanel). Hope is always on the horizon, but Delilah is directionless and discovers the gritty detours that scrape emotions raw. This Canadian film was shown at the 1997 Hollywood Film Festival. ~ Bhob Stewart, Rovi

There are no critic reviews yet for Horsey. Keep checking Rotten Tomatoes for updates!

There are no featured reviews for Horsey at this time.