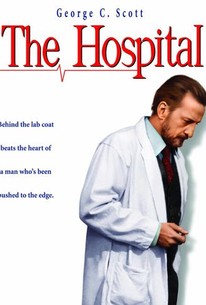 Hospital is a black comedy about a bitter, suicidal doctor (George C. Scott) whose hospital is being destroyed by the murders of several staff members, as well as the staff's own ineptness. Eventually, he falls in love with a young woman (Diana Rigg), who just makes his world more confusing. The film is a black satire, and the witty, satirical Academy Award-winning screenplay by Paddy Chayefsky makes it a very entertaining comedy.

Nancy MacKay
as Sheilah
View All

Critic Reviews for The Hospital

The Hospital is a better movie than you may have been led to believe. It has been criticized for switching tone in midstream, but maybe it's only heading for deeper, swifter waters.

Paddy Chayefsky's Oscar-winning script is bilious and brutal in its look at the medical community.

It will have you pondering the effectiveness of the American healthcare system, one that hasn't changed (too) much since '71.

This darkly humorous satire of an urban hospital is probably the only decent movie that Arthur Hiller had directed, benefiting from Chayefsky's Oscar winning script.

It was hard to come out of The Hospital feeling all that well.

Another towering performance by the great George C. Scott highlights this scathing satire of the medical field.

Audience Reviews for The Hospital

In a hospital wracked with bureaucracy and poor patient care, a suicidal doctor struggles to find meaning in his work and life. Part black comedy, which is drawn from the absurdity of reality, and part serious drama, The Hospital is one of the best films about the medical profession that I have ever seen. Incredible in its verisimilitude, Paddy Chayefsky's screenplay is smart, incisive, and passionately written. George C. Scott's performance is one of the best of his career, and his "freedom for the impotents" monologue is an enviable, engaging piece of acting. At its core, The Hospital is about how even the most human of moments fails to satisfy a deep urge to connect with our own humanity. It's about the disappointments of life, how they wear on us, turning us into unrecognizable automatons. The characters reach for meaning, and disappointed, they reach again, harder and more desperate. Overall, I love this film, and not only should it be required viewing in every medical school, its themes transcend a particular profession or historical moment.

Paddy Chayefsky is almost infallible at giving the toughest and loudest social and existencial commentaries under the veil of comedy. He did that flawlessly in "Marty" and "Network", and although here he doesn't , still the film packs a good punch to the establisment. George C. Scott is magnificent, as always. His rage and tortuous pain seem on the surface all the time, like he really was the character he plays. The story looses up a bit by the end, while the first half is wonderfully cynic.

The script is great, but the execution is flawed. Several times the film loses it's grasp on it's tone and stumbles as a result. Diana Rigg is SOOOOOOOOOOOO HOTTTTTTTTTT in this though, it almost makes up for it. And I could have done without the rape scene too.

Dark comedies and satires are always hit or miss, and this one tends to miss. There are a few moments where I understand something is funny, but it's not so funny that it makes me laugh. I wouldn't recommend this movie.