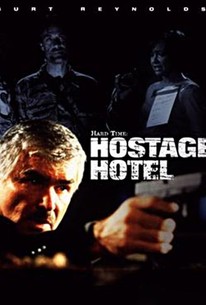 Produced for the TNT cable network, this is the last in a short series of TV movies starring Burt Reynolds as retired police detective Logan McQueen. Something of a bargain-basement Die Hard, the plot is set in motion when a disturbed, vengeance-seeking Vietnam veteran named Arlin Flynn (Keith Carradine) takes over the landmark California hotel where congressman Robert Sinclair (David Rasche) is delivering a speech, then kidnaps Sinclair's family. The situation becomes personal for maverick former cop McQueen when his ex-partner Charlie Duffy (Charles Durning) is also kidnapped while trying to negotiate with Flynn. Despite the many deadly booby traps set in and around the besieged hotel by the crazed but clever villain, McQueen endeavors to defuse the crisis and rescue the hostages himself. Directed by longtime Burt Reynolds crony Hal Needham, Hostage Hotel first aired November 14, 1999.

Nathalie Huot
as Rita
View All

There are no critic reviews yet for Hostage Hotel. Keep checking Rotten Tomatoes for updates!

There are no featured reviews for Hostage Hotel at this time.