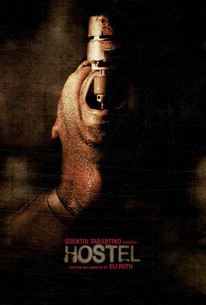 Critics Consensus: Featuring lots of guts and gore, Hostel is a wildly entertaining corpse-filled journey -- assuming one is entertained by corpses, guts, and gore, that is.

Critics Consensus: Featuring lots of guts and gore, Hostel is a wildly entertaining corpse-filled journey -- assuming one is entertained by corpses, guts, and gore, that is.

Critic Consensus: Featuring lots of guts and gore, Hostel is a wildly entertaining corpse-filled journey -- assuming one is entertained by corpses, guts, and gore, that is.

Two adventurous American college buddies, Paxton and Josh, backpack through Europe eager to make quintessentially hazy travel memories with new friend Oli, an Icelander they've met along the way. Paxton and Josh are eventually lured by a fellow traveler to what's described as a nirvana for American backpackers -- a particular hostel in an out-of-the-way Slovakian town stocked with Eastern European women as desperate as they are gorgeous. The two friends arrive and soon easily pair off with exotic beauties Natalya and Svetlana. In fact, too easily. Initially distracted by the good time they're having, the two Americans quickly find themselves trapped in an increasingly sinister situation that they will discover is as wide and as deep as the darkest, sickest recess of human nature itself -- if they survive.

Josef Bradna
as The Butcher

I Know Who Killed Me, Norbit, Daddy Day Camp Lead Razzie Noms
Eli Roth, Michael Dougherty On Board for Heroes: Origins
RT-UK’s What to Watch at the Edinburgh Film Festival

Whether or not this kind of horror movie is your cup of tea, you have to at least admire Roth for the daring and creativity with which he illustrates that concept.

Hostel's merely unpleasant and more than a little dumb.

The first act's filler, otherwise it's a squirmer. Bring a bucket.

Sadly, as with [director Eli] Roth's promising but flawed debut feature, its central conceit is more compelling than what ended up on screen.

Beyond its 'How far can I go?' attitude to violence, Hostel has no reason to exist.

There's a feeling of not quite hitting the mark here.

There's a darkly comedic edge to Hostel that works in the film's favor, but it's not quite as clever as it seems to think it is.

Of the two, Hernandez offers the stronger of the performances as we watch him transformed and nearly destroyed by his captors.

This is a grim, gory, and unapologetically grungy piece of "survival horror." I dug it.

Whereas most modern slasher films cut straight to the flesh-ripping for no purpose of art or psychological stimulation, Hostel marries them with skillful execution and, somehow, a relevant subtext.

A series of interesting ideas floating around a sea of blood

Roth is able to change the focus from frolicking raunchiness to extreme chilliness in a way that's quite sobering.

A good horror film but overhyped. Didn't think it was any more gory than most other recent horror films. Seen far more gore in many low budget horrors.

It starts out as a stupid dope and sex comedy for a while before things get uncomfortable and ultimately unbearably cruel. And for the longest time it's easy to keep your distance to the film, shake your head at the mediocre acting and unrealistic character decisions. In the last 30 minutes the film goes so batshit crazy, incredibly cruel and basically out of its way to give each character what they deserve that it's actually kinda fun. At least if you don't mind watching someone's eye hanging out of the socket getting cut off with a pair of scissors. Insane.

After giving the first Hostel a second viewing, I found myself liking it more than the first time. The first time I saw this film, I absolutely despised it. I didn't like it whatsoever. I don't know what I liked from the second viewing, but I guess that it what it was supposed to. The gore is unrelenting, this film is violent and disgusting, and it's a true thrill ride and brings Horror porn to a whole new level. Eli Roth is a fairly decent director; I also enjoyed his first film, Cabin Fever. Hostel is definitely not for the faint of heart, there are some strong graphic scenes of violence that even the strong stomachs won't be able to tolerate. A decent enough film, only the second time around Hostel was a good film but I personally prefer the Saw series. Hostel has definitely unnerving sequences that aren't for the squeamish. The film is very much a different type of film than the Saw series, but it still has the vibe. Hostel is yet another gore riddled torture porn horror flick that will most likely appeal to fans of horror that enjoy good gore. This is the only film in the trilogy that I enjoyed, and that I really recommend. This is worth watching if you want something a bit different, and very disturbing. This definitely one of few original ideas for a horror films that works. The film has its flaws, but Eli Roth delivers a good flick that definitely is worth your time. This is a work of a director who took a risk, and it has definitely paid off.

[img]http://images.rottentomatoes.com/images/user/icons/icon13.gif[/img] Horror director Eli Roth has always had a terrific visual style and understands the elements of making good horror movies but i've always had mixed feelings about him because he never manages to completely pull it off. Firstly I think he's talented because he has a terrific directorial style and evidently he's a completely dedicated film maker. Although I didn't like the film much he demonstrated he had talent with Cabin Fever but the film wasn't quite up to scratch, Hostel suffers from similar problems. The first 50 minutes offers nothing more than tongue in cheek humour and sex which at times work but also feels somewhat like a filler for what has yet to come. When it does come it's fantastic, the last 40 minutes of Hostel is rightfully disturbing and gut churningly sick with plenty of blood, gore and corpses. It doesn't come across as dumb like most films of the genre, in ways this corrects what was wrong with Cabin Fever but Hostel unfortunately lacks what was good about Cabin Fever. It had substance and characters you cared about. It's not scary in the slightest and at best the film works as a throw away gorefest but it's nothing more than that. But since I still believe Roth may do better with the first sequel i'm up for seeing Hostel's Part 2 and 3 because maybe they turned out to be an improvement. Doubting that they will have any more substance than this, maybe they'll at least get to the gore quicker with a setup that doesn't take half the film's running time.