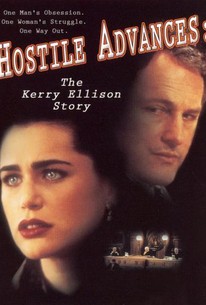 Working in a branch office of the Internal Revenue Service, Kerry Ellison (Rena Sofer) must suffer the unwanted advances of co-worker Jack Gilcrest (Victor Garber), who among his other "eccentricities" carries a live grenade in his car. Even when Kerry is transferred to another division, Jack's stalking does not diminish. Even worse, Kelly's bosses dismiss Jack's obsession as harmless, and her labor union refuses to take action. In a last-ditch effort to see that justice is done, Kerry files a sexual harassment suit against her employers -- and from this point forward, to say that the IRS makes her life hell would be understating the situation. Based on a true story, Hostile Advances: The Kerry Ellison Story was produced for the Lifetime cable network, where it first aired on May 27, 1996.

Don Francks
as Marty
View All

There are no critic reviews yet for Hostile Advances: The Kerry Ellison Story. Keep checking Rotten Tomatoes for updates!

There are no featured reviews for Hostile Advances: The Kerry Ellison Story at this time.