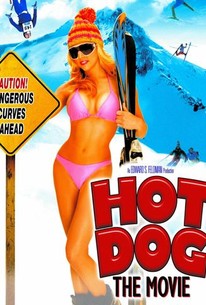 The action in this run-of-the-mill teen comedy in not as much on the slopes as between the sheets, or on the way to the sheets, as Harkin (Patrick Houser) picks up a hitchhiker (Tracy N. Smith) heading to a Lake Tahoe ski resort. Once there, Harkin joins up with a party-loving group of skiers led by Dan (David Naughton), a New Yorker. When the mix of young men and women are not shaking down into couples, attention focuses on the competition with the world ski champ Rudi Garmischt (John Patrick Reger) -- eventually leading to a spectacular sequence of skiing artistry down the snowy slopes, a tour-de-force that rivals scenes from the Bond movie The Spy Who Loved Me. ~ Eleanor Mannikka, Rovi

Sandy Hackett
as Lester the Molester

Jim Clark
as Cowboy at Bar

Robin Haynes
as Announcer
View All

There are no critic reviews yet for Hot Dog...The Movie. Keep checking Rotten Tomatoes for updates!

A little too much skiing in this movie for me, and the ending is horribly cheesy, but there are some good jokes thrown in, so it's was enjoyable some of the time.