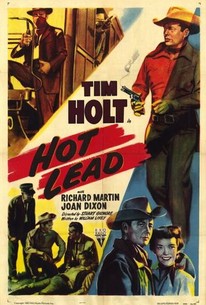 Tim Holt comes to the aid of a young telegrapher wrongly accused of murder in this average western from RKO. The telegrapher, Dave Collins Ross Elliott, is released on parole and on his way west when hi-jacked by the same gang that caused his imprisonment in the first place. Gang leader Turk Thorne (John Dehner) needs Dave's help in an upcoming train heist but before he can "persuade" the youngster to go along with the scheme, Dave is rescued by cowpokes Tim Holt and Chito Rafferty (Richard Martin). But Thorne does not give up that easily and soon Dave is accused of killing the local telegrapher (Paul E. Burns), a crime actually committed by Thorne himself. Tim believes in Dave's innocence, however, and agrees to help him by setting a trap for Thorne and his henchmen. ~ Hans J. Wollstein, Rovi

There are no critic reviews yet for Hot Lead. Keep checking Rotten Tomatoes for updates!

There are no featured audience reviews yet. Click the link below to see what others say about Hot Lead!