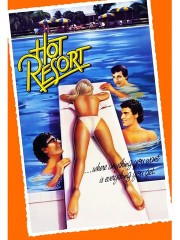 Michael W
February 16, 2016
An embarrassing comedy attempt from the almost-always reliable Cannon/Golan-Globus production team. Clearly, their best efforts applied to the action genre. ABC Network execs, however, obviously took notice, locking up both Pinchot and Schneider for sitcoms in 1986.

Shawn W
October 27, 2012
Unprofessional American seasonal workers at the Royal St. Kitts irk management and preppie guests. This hotel apparently does not hire locals. Very annoying comedy. Golan-Globus should have stuck to action films. This was worse than Hot Chili.

Timothy S
September 3, 2012
During the 1980's, raunchy teen comedies saturated the marketplace and while a handful became classics, most were made quickly to make a quick buck and quickly disappear. The blandly titled "Hot Resort" definitely falls into that last category, and the film is simply pieced together from the decade's worst films to make a new, super-awful film.

It's full of raunchy humor but not a single laugh, and it's obviously modeled after "Police Academy" with a motley bunch of rejects bucking the system. It's class conflict at its worse with the working class slobs versus the rich kids, and the film is little more than a collection of vignettes with the barest thread tying it all together.

Only a handful of the large ensemble cast made a name for themselves after this debacle, but that short list doesn't include the film's star, Tom Parsekian. That name doesn't exactly translate well to stardom, and he's basically a poor man's Michael Keaton. He only made one other film after the bad taste from this one faded away. It's chock full of distasteful jokes and gay stereotypes, which were common in films like this, and even culminates in a sports competition between the jocks and the screw-ups. You don't get much more common that that.

And the production values are shockingly low. This looks years older than it really is. "Hot Resort" takes the worst elements of the genre and sinks it even lower. The most offensive thing about this is how ordinary it is.

Gary K
½ March 26, 2011
Even by Golan-Globus standards, this one is a stinker. "Hot Resort" is just a bad movie -- the boom mic even appears twice in one scene! What is supposed to be a class warfare comedy is a misfire. The most interesting thing about this movie is the cast list, which includes Frank Gorshin (The Riddler in the 1966 "Batman"), Bronson Pinchot ("Beverly Hills Cop" and TV's "Perfect Strangers"), Marcy Walker (who would go on to a 23-year career on "All My Children"), Mae Questel (the voice of Betty Boop and Olive Oyl in the classic Popeye cartoons; also played Aunt Bethany in "Christmas Vacation"), and Dan Schneider (TV's "Head of the Class" and producer of kids' TV shows "All That," "Zoey 101," "iCarly" and others).

Shawn W
September 29, 2010
Unprofessional American seasonal workers at the Royal St. Kitts irk management and preppie guests. This hotel apparently does not hire locals. Very annoying comedy. Golan-Globus should have stuck to action films. This was worse than Hot Chili.
Page 1 of 1