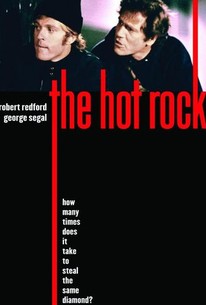 Peter Yates directs the early '70s comedy caper The Hot Rock, based on the Donald Westlake novel and adapted for the screen by William Goldman. Robert Redford stars as John Archibald Dortmunder, a former jewel thief just released from prison. His brother-in-law, Andrew Kelp (George Segal), recruits him to steal a diamond from a museum. They are hired by Dr. Amusa (Moses Gunn), an ambassador from Central Fatawi, whose people consider the stone to be sacred. John and Andrew assemble a team with Alan Greenberg (Paul Sand) and Stan Murch (Ron Leibman). They successfully pull off the job until the guards arrest them and Alan swallows the diamond. Alan's father (Zero Mostel) helps him break out of jail, which leads to a series of other heist attempts. ~ Andrea LeVasseur, Rovi

Critic Reviews for The Hot Rock

It's a great action film and a blissfully funny one, too.

"The Hot Rock" may be Robbery Movie No. 345. But there's as much fun as familiarity in it.

A crazily funny show with satisfying measures of wit and ingenuity in cunning combination.

"Rock" springs from the tired loins of that overbred formula, the Big Heist. It proves, however, that the right kinds of talent can transform any old formula into something new and different.

An exhilarating conclusion leaves us smiling...

What "The Hot Rock" lacks in originality, it more than makes up for in lively and engaging fun.

This caper movie is not without its flaws, but it boasts a sense of finesse and fun that other films in the genre sadly lack.

Those seeking something a little more off the beaten path than The Natural or Butch Cassidy and the Sundance Kid should check out this entertaining caper yarn.

Filmmaker Peter Yates generally does an effective job of capturing the lighthearted yet briskly-paced tone of Westlake's (admittedly superior) novel...

One enters the theater with great expectations. And one leaves muttering '"Promises, promises.''

Audience Reviews for The Hot Rock

Enormously entertaining caper flick where a quartet of thieves don't have just one job, they have to pull off four - a museum, the state prison, a police station, and a bank - and all to get the same diamond! Redford is typical Redford as the cool-as-a-cucumber brains of the group, although he tends to get arrested and needs antacids to offset the nerves he internalizes. George Segal is the optimist and master locksmith, while Ron Leibman and Paul Sand round out the team, and we can't forget Zero Mostel as a crooked lawyer. There's always something amusing going on in William Goldman's script which adds offbeat color to the story, like an old woman who interrupts a gang meeting in the park to feed the birds, or a bum who steals Redford's watch when he's casing a building, or the getaway driver and his mother who listen to speedway recordings of roaring engines for recreation. Plus, there's a breathtaking extended helicopter ride through downtown New York City. If you love caper movies, you've got to see The Hot Rock. "Johnny.....Can't you go straight this time?" "I just don't have it in me."

A band of criminals played by some great 70s actors, go out to steal a diamond, with hilarious results. I enjoyed this movie, it's not very different from other movies like that, but it's fun.