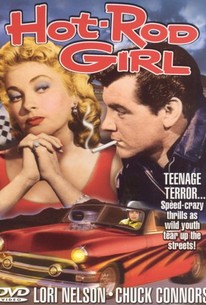 American-International's Hot Rod Girl is a whole lot less exploitaitonal than its title. Chuck Connors stars as Ben, a policeman who hopes to stem an outbreak of juvenile delinquency. Overcoming great obstacles--most of them created by prejudiced adults--Ben hopes to build a drag strip, where hot-rodding teenagers will be allowed to race their motors in safety. The title character, Ben's pretty sister Lisa, is played by Lori Nelson. Among the hot-rodders in Hot Rod Girls is a young Frank Gorshin (here billed as Frank J. Gorshin), who ten years later would reteam with director Leslie H. Martinson on the set of the theatrical-feature version of TV's Batman.

Dabbs Greer
as Henry
View All

There are no featured reviews for Hot Rod Girl at this time.