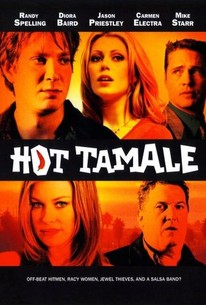 A young man chasing his destiny finds there are plenty of things following him in this independent comedy drama. Harlan (Randy Spelling) is a musician who dreams of playing salsa music for a living; however, Latin music isn't a big thing in the small Wyoming town he's always called home, so he packs up his belongings and hits the highway for bright lights of Los Angeles, where his friend Caesar (Matt Cedeno) has promised him a spot on his couch and an audition with a band. Harlan stops for a bite to eat along the way and meets a guy named Jude (Jason Priestley), who unknown to Harlan has slipped a bag of purloined jewels in his car. Upon arrival in L.A., Harlan aces his audition with the band, but the mysterious disappearance of Caesar alarms both Harlan and Caesar's attractive lady friend Tuesday (Diora Baird). As it happens, a handful of gangsters led by the sexy but dangerous Riley (Carmen Electra) have learned that Jude's valuables are in Harlan's car, and they'll stop at nothing to get them back, including kidnapping Tuesday. Hot Tamale received its world premiere at the 2006 Newport Beach Film Festival.

Jon Huertas
as Alex
View All

There are no critic reviews yet for Hot Tamale. Keep checking Rotten Tomatoes for updates!

There are no featured audience reviews yet. Click the link below to see what others say about Hot Tamale!