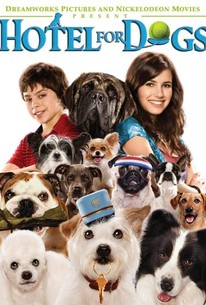 Critics Consensus: Hotel for Dogs may appeal to children and dog lovers, but it's ultimately contrived, predictable, and simplistic.

Critics Consensus: Hotel for Dogs may appeal to children and dog lovers, but it's ultimately contrived, predictable, and simplistic.

Critic Consensus: Hotel for Dogs may appeal to children and dog lovers, but it's ultimately contrived, predictable, and simplistic.

When their new guardians forbid 16-year old Andi and her younger brother, Bruce to have a pet, Andi has to use her quick wit to help find a new home for their dog, Friday. The resourceful kids stumble upon an abandoned hotel and using Bruce's talents as a mechanical genius, transform it into a magical dog-paradise for Friday--and eventually for all Friday's friends. When barking dogs make the neighbors suspicious, Andi and Bruce use every invention they have to avoid anyone discovering "who let the dogs in."

Kenny Vibert
as Jason
View All

News & Interviews for Hotel for Dogs

View All Hotel for Dogs News

Critic Reviews for Hotel for Dogs

The dogs are never quite as entertaining as they should be for the kids in the audience, and the hypercutesiness and speechifying at the end will lead to much tightening of adult sphincters.

The schmaltz is laid on thick, but kids love this sort of stuff and, refreshingly, the dog bits are done the old-fashioned, fun way: with animal trainers rather than CGI.

Inventive and endearing in places but ultimately an unsatisfying mix of slow plotting and superficial characterisation.

True, there's only the merest suggestion of an education system for these juveniles, but credibility's secondary when you've got lots of dogs doing cute stuff.

It needs something quite special to save this film from toxic splurges of sentiment. Lisa Kudrow and Kevin Dillon duly oblige as a pair of fabulously awful foster parents.

Plays it very safe and sticks to a tried-and-true children's movie formula.

Feels a lot like a retro family film similar in tone to 70's Disney flicks.

Naturally, the dogs are the star of the show here, and some of their feats (unaided by computer effects) must be seen to be believed.

Hotel for Dogs delivers warm messages about generosity and sticking with seemingly impossible goals. There are worse ways to spend a winter afternoon than with this amusing comedy.

Undemanding tykes will gets their giggles flowing with the Rube Goldberg-style contraptions invented for the dogs.

Audience Reviews for Hotel for Dogs

Bienvenue aux chiens perdus! (Welcome to the lost dogs!) Good family movie! For all you dog lover's out there this movie will satisfy your thirst. Decent story with some funny moments and a happy ending. Siblings Andi (Emma Roberts) and Bruce (Jake T. Austin) are orphans, and they live with wannabe rock-star foster parents Lois and Carl Scudder (Lisa Kudrow and Kevin Dillon). Due to the foster parents awful treatment, the kids and their beloved dog Friday (who is hidden from the foster parents) spend their days on the streets. To get money for food for themselves and the dog they deceive a pawn shop, but are caught. Their social worker Bernie (Don Cheadle) reprimands them, but helps them to minimize the damage. One day while out on the streets as usual, they witness a store being robbed. The police seeing the two kids standing nearby accuse them as being the robbers and here starts a silly chase all over town. The kids eventually hide in an old abandoned hotel but are spooked when they here footsteps and chairs falling over. Come to find out the hotel is occupied by two dogs. The following day the kids gather up all the food from their foster parents pantry and refrigerator and secretly take the food to the hotel for the dogs. That's when they get the idea to turn the hotel into a home for the three dogs and any other strays they can find. They are joined by a boy named Dave (Johnny Simmons), a girl named Heather (Kyla Pratt), (both of whom work at a pet store). And later joined by a kid who lives nearby named Mark (Troy Gentile). The kids rescue about 20 or so dogs. Bruce invents and constructs many ingenious machines using parts he steals from his foster parents, to help feed the dogs and provide sanitary facilities, exercise and entertainment for them. The dogs are quick in learning how to use the machines. Later on Bernie announces to them they can move from the foster home they hate to a new one that is a few hours away. Even though this may be their last chance to be placed in a foster home together, they decline as they care too much about the dogs to abandon them, but they cannot tell Bernie this reason because they might be forbidden to continue their care for the dogs. One night while Andi and Dave are at a party (which turns into a disaster when Andi ends up getting punch on her dress, causing her to leave the party in tears) and Bruce is at his foster parents being reprimanded for a hair dryer he stole from them, the machines fail and the dogs go wild and cause so much noise that the police are called. The dogs are taken to a pound and Bruce and Andi's foster parents kick them out for stealing. As predicted, they are sent to separate foster homes. The pound prepares to euthanize the dogs, but Friday escapes and finds Dave. The two reunite all of the kids and they decide to save the dogs despite the fact that they are going to get in big trouble. They break the dogs out of the pound and try to lead them over the county line (Bruce tempting them to follow the van with sausages) to an animal shelter that has a no kill policy, but as the dogs get close to the hotel, they make a bee line there instead as that is their 'home'. The kids and a massive crowd of people follow. The police call Animal Control who tries to take them back,. Bernie having seen what the kids did, makes a speech in favor of the dogs for the kids rescued so many strays and gave them a home which is something he had been trying to do with the kids he dealt with. (When he introduces the two twin dogs, Viola and Sebastian, this makes reference to the play, "Twelfth Night". The characters Viola and Sebastian are twins in the play. And the dogs Romeo and Juliette are mates) With donations from the people of the city, the hotel is fixed up and turned into an actual hotel for dogs. The kids all work there. Lois and Carl Scudder are 'howling' good entertainment for the dogs in the lounge and Bernie and his wife end up adopting Andi, Bruce, and Friday.

Harmless but forgettable fluff designed to make every child feel as though they are worth something. Roberts plays a young girl thrown from foster home to foster home with her brother. Needless to say, they soon meet a load of dogs that also can't find a family. Soon they're running a Hotel for Dogs to escape the misery of their lives. All this would be easier to swallow if Roberts and Austin were relatable. They commit crimes to make money. Who cares if their parents are dead, there are plenty of law abiding orphans out there. Cheadle is a surprise turn out in this paint by numbers fluff. It can be entertaining, but the dog handlers deserve the biggest congratulations.

All the innocence of the Beethoven film series but with more dogs.

Wonderful and sweet family movie with really great performances - and yes, I'm also referring to these of the dogs because I love them as I have one.