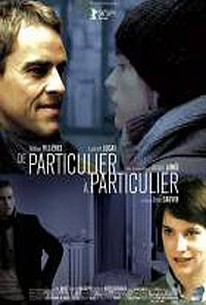 Earning frequent comparisons to the finer work of David Lynch for its defiantly unpredictable and enigmatic narrative twists, neophyte director Brice Cauvin's political thriller Hotel Harabati opens at a Parisian train depot, with a European couple in their mid-thirties, Philippe (Laurent Lucas) and Marion (Helene Fillieres), waiting to journey to Venice. Without substantial explanation, they promptly retrieve a suitcase that doesn't belong to them; labeled with the words "tel Harabati" (or 'Hotel Harabati'), it contains a massive amount of neatly-rolled foreign currency. They decide impulsively to skip their Venetian tour and hearken back to the City of Lights, but deceive kith and kin, fabricating accounts of Venice to Philippe's mother Nelly (screen legend Anouk Aimee) . In time, the couple begins to search for new living quarters for themselves and their two little boys; open talk of the bag dissipates, yet Philippe's paranoia mounts, particularly given the discussions of neighborhood bombings on the local news and sightings of an unsavory character who exudes a menacing aura - and who may or may not be connected with the suitcase. Cauvin co-authored the original script with Jerome Beaujour and Pierre Schoeller; Julie Gayet (Les Gens qui s'aiment) and Anthony Roth Costanzo (A Soldier's Daughter Never Cries) co-star. ~ Nathan Southern, Rovi

In terms of keeping his plot obscure, director Brice Cauvin tips his chapeau in the direction of David Lynch, but ultimately it's rather lifeless. File under "calculatedly enigmatic".

Absorbing and frustrating in equal measure.

Playfully blurs the boundaries between the real and the imagined, and unfolds against a backdrop of mysterious terrorist attacks in the French capital.

An intriguing, ably shot and directed addition to the 'cinema of anxiety' .

Echoes of Michael Haneke reverberate around the action but an eschewal of logic makes this feel like self-indulgence rather than ingenuity.

A compelling combination of domestic and surreal drama, which proves that there's nothing more mysterious than a seemingly happy couple.

While the understated indeterminacy of Hotel Harabati represents the height of filmmaking maturity, immaturity would appear to be the key theme holding all the film's perplexities together.

There are no featured reviews for Hotel Harabati (De particulier a particulier) at this time.