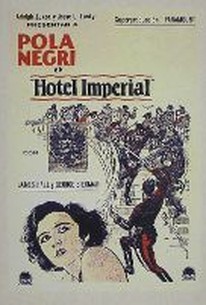 Based on a Hungarian play by Lajos Biro, Hotel Imperial stars Pola Negri as a chambermaid in a small Gallacian hotel. When World War I erupts, the town in which Pola lives is alternately occupied by both the Russians and the Austrians. As the film's various intrigues play themselves out, we learn that Pola is actually an aristocrat, posing as a maid to find her sister's murderer, which she does with the help of handsome Austrian officer James Hall. Hotel Imperial represented the last directorial effort of Mauritz Stiller, who returned to Sweden after being rejected by the love of his life, Greta Garbo. This, coupled with the death of Pola Negri's ex-lover Rudolph Valentino during production of Hotel Imperial, earned the film a reputation as a "jinx." The curse evidently carried over to the 1939 talkie version, which had an even more benighted production history.

In direction and camerawork the picture stands out, but the story isn't one that is going to give anyone a great thrill.

After the fanfare of panegyrics from more or less prejudiced sources, Hotel Imperial, Pola Negri's new photoplay, hardly lives up to expectations. It is, nevertheless, an interesting film with some cleverly directed scenes.

It lacks that homely quality which is known as guts -- and all the trick lighting, all the twisted lenses in creation would be unable to atone for the fundamental vitality that isn't there.

Pola Negri In the role of Anna Sedlak, maid of all work at the Hotel Imperial, displays her ability as an emotional actress and her versatility in playing the part with the naivete of an ingenue.

[The producers] worship a minor deity called "box-office appeal," which demands that every film should have a stereotyped happy ending, however improbable.

There are no featured reviews for Hotel Imperial at this time.