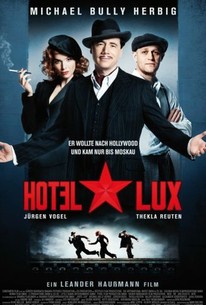 In 1938 Hans Zeisig, an apolitical comedian, impersonator and cabaret actor, flees with a Russian passport (instead of American, which he would have preferred) from Nazi-Berlin, and finds himself in the legendary Hotel Lux, the 'lost paradise' of the Comintern, in Moscow. Everyone believes that Zeisig is a man named Hansen, Hitler's personal astrologer. But Zeisig quickly realizes that he's gone from the frying pan into the fire. In the Hotel Lux he meets his friends Frida and later Meyer again, still passionate communists. For the three idealists an adventure between love and death begins to run its course.

There are no critic reviews yet for Hotel Lux. Keep checking Rotten Tomatoes for updates!

There are no featured reviews for Hotel Lux at this time.