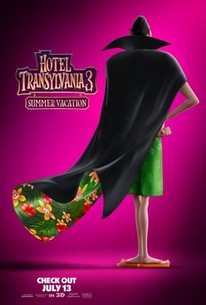 In Sony Pictures Animation's Hotel Transylvania 3: Summer Vacation, join our favorite monster family as they embark on a vacation on a luxury monster cruise ship so Drac can take a summer vacation from providing everyone else's vacation at the hotel. It's smooth sailing for Drac's Pack as the monsters indulge in all of the shipboard fun the cruise has to offer, from monster volleyball to exotic excursions, and catching up on their moon tans. But the dream vacation turns into a nightmare when Mavis realizes Drac has fallen for the mysterious captain of the ship, Ericka, who hides a dangerous secret that could destroy all of monsterkind.

Mel Brooks
as Vlad
View All

Tepid, though not entirely charmless...

Even watched beside various incarnations of the Addams and the Munsters, this remains the most family-friendly and proudly silly of all the monster dynasties.

Hotel Translyvania 3 looks very much a B-movie, with characters that are easy to like but hard to love. Still, at just 97 minutes it doesn't outstay its welcome.

It's crass, culturally bankrupt cash-grabbing that celebrates the worst, most obnoxious aspects of a globally popular Hollywood genre (kids' animation).

The whole thing, with its joyless and incessant parade of sub-Tex Avery quirks, looks as if it has been generated by some sort of automated software: a non-entertainment bot.

It ends even more absurdly than it begins.

...though there's no sunshine in the movie, Hotel Transylvania 3 definitely has a summer vibe. And watching these characters try to navigate the naturally corny nature of a cruise ship vacation is pretty hilarious.

The film sinks faster than the Lost City of Atlantis.

Undeniably fun, brightly animated and has enough of a unique style to stand as an animated offering well worth taking the family to.

I actually have a soft spot for the Hotel Transylvania films -- there does seem to be a genuine love of the old Universal monster titles, and this one is no better or worse than the previous chapters.

The animation of these characters draws from cliched definition and twists it to bring out laughs.

It's Adam Sandler's voice talent as Dracula who steals the movie. Never has Dracula been more alluring or funny.

Andy Sambergï¿ 1/2(TM)s character has zero consistency, but he delivers the single funniest joke in the movie in the most genuine of ways to the point it almost makes up for how generic every other laugh in the movie is. That said, even though the Hotel Transylvania series has always felt rather cheap and completely average the background animation in this latest entry is rather exquisite. Of course, as gorgeous as the animation indeed is, the fact it quickly shot to the top of the ï¿ 1/2prosï¿ 1/2Â? list should tell you enough about the mediocrity of the rest of the movie. P.S. The Abraham Van Helsing character and character design is totally bonkers and kind of fantastic.

The Hotel Transylvania series has been consistently entertaining since the release of the original film back in 2012. Whether or not you're a fan of the humour throughout these movies or not, it's made for kids, and I believe that it serves its purpose once again with this latest installment in Hotel Transylvania 3: Summer Vacation. While each film isn't without its issues, I have been entertained by the life-lessons for kids and the story arcs that each character goes through. Personally, I wouldn't recommend these movies to anyone who isn't susceptible to children's humour, or even animation in general-because this isn't a series that's going to win you over. If you liked the first two movies, you'll probably get a kick out of this one for the most part. Here's why Hotel Transylvania 3: Summer Vacation is passable fare. Adam Sandler and company all return to lend their voices to this film and it's honestly the one film franchise where they all fit as a whole in my opinion. This time, the residents of Dracula's hotel attend a summer vacation cruise, but they don't know that it's manned by Dracula's evil nemesis, Van Helsing (well, at least his family's legacy). I would normally consider a plot point like that to be a spoiler, but it's given away in the first 20 minutes, so every viewer's surprise will be ruined regardless. It's a fairly sloppy film in that regard, but the other two are sort of like that as well due to the fact that they're mainly directed at kids. For that reason alone, I can forgive it, but it did make for a bit of a frustrating experience. The storyline involving Mavis and Johnny has always been the heart of the franchise in my opinion and truly the only spark that allowed for sequels. Sure, the sense of adventure has always been there, but their story is what makes the core character of Dracula evolve throughout each film. That being said, they're really given the short end of the stick here, being played off as a bumbling couple for comedic purposes. Yes, Johnny has his time to shine throughout the third act, but I felt like they were left out of the big picture in order to make room for Dracula's story, which they didn't have much to do with. Hotel Transylvania 3: Summer Vacation centres its attention on the characters of Dracula and Ericka, who is the great-granddaughter of his arch-nemesis. This plot line is stretched pretty thin throughout the course of the film, due to the fact that there are no surprises or twists to be had with them. You already know she works for the bad guy and you know he will eventually find out. There is no way of spoiling this movie because it's about as by-the-numbers as you can possibly get. Still, this film isn't without its perks and quirks. Every characteristic I enjoyed about each of the characters over the course of this series is cranked up to eleven and many liberties are taken that will either interest fans or completely turn them off, which I found quite risky. For the most part, I enjoyed myself when watching this film, but it truly is as predictable as you can get. Predictability isn't always a bad thing, especially when your execution is really all that matters in the end. I'm not clamoring for another addition in this franchise, but I wouldn't hate to see it continue either. I've always been mildly entertained by these movies and Hotel Transylvania 3: Summer Vacation didn't do too much to sway me from that in either direction. It's fine fare for kids at the movies and that's about it, but sometimes that's okay.