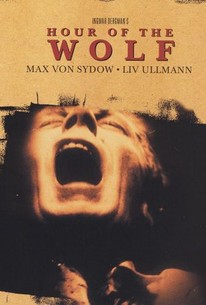 Critics Consensus: Ingmar Bergman makes a successful foray into horror with Hour of the Wolf, infusing the demons that spring from creativity with his trademark psychological curiosity.

Critics Consensus: Ingmar Bergman makes a successful foray into horror with Hour of the Wolf, infusing the demons that spring from creativity with his trademark psychological curiosity.

Critic Consensus: Ingmar Bergman makes a successful foray into horror with Hour of the Wolf, infusing the demons that spring from creativity with his trademark psychological curiosity.

Hour of the Wolf (Vargtimmen) Photos

The Hour of the Wolf (original Swedish title: Vargtimmen) is Ingmar Bergman's spin on the demons that plague his fellow creative artists. Max von Sydow plays a painter who, while spending a summer in seclusion with his pregnant wife Liv Ullmann, is visited by bizarre and disturbing visions. Before long, Ullmann is also experiencing her husband's hallucinations; one of these, an old, faceless woman, advises Ullmann to read Von Sydow's diary. Doing so, Ullmann discovers that her husband has been cheating on her with Ingrid Thulin. In the subsequent domestic squabble, Von Sydow shoots and wounds his wife. The artist's punishment for this behavior is to have his lover, now dead, spring back to life and humiliate him in full view of Ullmann. Hour of the Wolf has something to say about the dangers of artists becoming too self-centered and self-involved; one hopes that most artists are not as thoroughly punished (or punishable) as Max Von Sydow.

Mikael Rundquist
as Boy in dream

Mona Seilitz
as Woman in Mortuary

Folke Sundquist
as Tamino I. Trollflojten
View All

Critic Reviews for Hour of the Wolf (Vargtimmen)

Hour of the Wolf is not one of Bergman's great films but it is unthinkable for anyone seriously interested in movies not to see it.

If we allow the images to slip past the gates of logic and enter the deeper levels of our mind, and if we accept Bergman's horror story instead of questioning it, Hour of the Wolf works magnificently.

A must for fans of horror and of Bergman. So good it makes you wish he had dabbled in the genre that bit more often.

This 1967 effort is one of Bergman's most outlandish, with its pack of ghouls and its heavy suggestions of exhibitionism, necrophilia, and homosexuality -- a magnificent failure.

Deserves to be counted as top-tier Bergman, or at least near the top of the second tier.

It flows so beautifully and once you kind of just give in to the madness it's all go.

Bergman experiments with psychological terror to construct a sharp thesis on adultery, jealousy, and the fears that constitute identity. [Full review in Spanish]

It cannot be emphasized strongly enough that what Bergman has done here structurally is a revolutionary achievement.

...the movie reveals Liv Ullmann as a unique perpetrator of humanistic depth and female presence.

Ingmar Bergman's only horror film is a strangely personal, realistic, yet voyeuristic and metafictional-type experience.

Bergman's doom-ridden follow-up to Persona reaches out its cold ancient mariner's grasp to stop one in one's tracks.

Audience Reviews for Hour of the Wolf (Vargtimmen)

gorgeous to look at and creepy as hell. max von sydow's dreams invade real life and not only his own

as with many bergman films, i toiled for some time to find a worthwhile and redeemable interpretation, but thankfully, this one gained a slight amount of clarity by the end. not in line with bergman's more masterful works, but not as bad as his overdone floundering films either. some of the dialogue was interesting and max von sydow was convincing as usual.

Hour of the Wolf is the only horror film Ingmar Bergman ever made. And it's amazing. Clearly influenced here by German Expressionism, Bergman and cinematographer Sven Nykvist use exaggerated and stylized light and shadow and deliberately disorienting camera angles to full affect. Bergman's penchant for intense, unblinking close-ups compliments this style of shooting well, and adds a sense of the surreal to the already bizarre happenings. The performances of the castle apparitions -- by actors such as Erland Josephson, Bertil Anderberg, and Ingrid Thulin -- certainly have a definite expressionist, stylized feel to them as well. This expressionist sensibility also calls for the dramatic externalization of the internal; this fits the subject matter of the film in two ways. First and most obvious, the expression of Johan's inner turmoil breaks the psychological barriers between self and other and between reality and unreality (and later, between life and death) necessary for Bergman to create true horror. Second, and a bit less obvious on the surface, is Bergman's own expression here of the internal realities of his own life. It may seem a bit too on-the-nose, but is there any doubt that Von Sydow's Johan is a stand-in for the writer/director himself? The character is a troubled, brilliant artist whose creative visions and past both interfere with his relationship with his pregnant wife. It is certainly no coincidence that the wife in question is played by Liv Ullmann, who at the time was herself pregnant with Bergman's child; the demands of Bergman's art and personality had threatened for a while to tear the two of them apart. There is clearly a dark side to the creative impulse, and its obsessions can impair life in the real world, whether for fictitious artist Johan Borg or real-life Ingmar Bergman. Perhaps that's why this film strikes such a chord: it feels personal, while at the same time fiercely artistic. A must-see for psychological horror fans.

A difficult sit to be sure, but Ingmar Bergman's stab at surrealist horror is a delight. It's thematically sort of fuzzy, barely frightening at all, and maybe a bit underconfident (Liv Ullmann's bookend monologues are interesting to see but ultimately unnecessary), both of which are acceptable losses when you consider that this is a genre Bergman had never attempted. I'm sure the movie's brooding isolationism and pervasive sense of danger were much scarier forty years ago sitting in a theater...I think that, more than a lot of movies, this gets garroted a bit by a home viewing. Still, it's mysterious and well-acted and spare in the best way, and definitely worth a watch if you like unconventional horror films.

Hour of the Wolf (Vargtimmen) Quotes