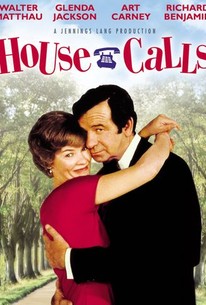 Recently widowed Dr. Nichols (Walter Matthau) finds himself ill at ease in re-entering the singles scene. Then he meets Ann Atkinson (Glenda Jackson), a patient recuperating from a jaw operation. Freshly divorced from a philandering spouse, Jackson is as reluctant to inaugurate a lasting commitment as Walter--but inaugurate they do, in a hilarious scene wherein Jackson and Walter try to emulate those romantic couples in 1930s movies who were forced by the censors to keep one foot on the floor while lying in bed. It is Jackson who encourages Matthau to stand up for his ideals during a lawsuit involving senile head physician Dr. Willoughby (Art Carney, who is unbearably funny at times). Richard Benjamin rounds off the cast of polished farceurs who add so much sparkle to House Calls. The film was later adapted into a TV sitcom starring Wayne Rogers in the Matthau role, Lynn Redgrave (and later Sharon Gless) in the Jackson counterpart, and David Wayne as a less aphasiatic version of the Carney character.

David Bond
as Patient in wheelchair

Though poor on character development, it catches the flavor of what a mediocre hospital looks like.

House Calls is a comedy film from 1978 that features Walter Matthau, Glenda Jackson, and zero laughs.

Howard Ziff directs this romantic comedy with a nutty appreciation for its likeable characters.

There are no featured audience reviews yet. Click the link below to see what others say about House Calls!