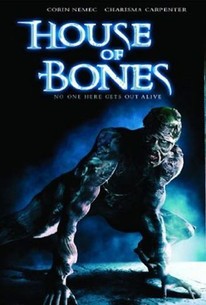 Corin Nemec and Charisma Carpenter headline this horror yarn about a group of reality television ghost hunters who get trapped in a haunted plantation home, and attempt to uncover its many secrets in order to survive their terrifying ordeal. The psychic special guest on a cornball reality television series exploring haunted houses, Heather (Carpenter) becomes convinced that a sprawling plantation is pulsing with supernatural activity. At first the producers laugh off Heather's outlandish claims, but when fleeting spirits are spotted and crewmembers go missing, it begins to seem as if the house itself is alive. Upon arriving on location, arrogant show host Quentin (Nemec) brushes off warnings of danger and rushes inside to rescue his colleagues. Upon entering, however, Quentin quickly realizes that the house is indeed haunted, and that his crew's only hope for conquering the evil therein to unlock the mysteries of the plantation's dark past.

Critic Reviews for House of Bones

There are no critic reviews yet for House of Bones. Keep checking Rotten Tomatoes for updates!

Audience Reviews for House of Bones