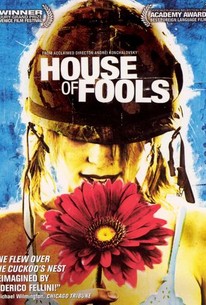 Critics Consensus: House of Fools has a potentially intriguing fact-based story to tell, but an insensitive approach to depicting mental illness undermines its effectiveness.

Critics Consensus: House of Fools has a potentially intriguing fact-based story to tell, but an insensitive approach to depicting mental illness undermines its effectiveness.

Critic Consensus: House of Fools has a potentially intriguing fact-based story to tell, but an insensitive approach to depicting mental illness undermines its effectiveness.

War brings together a disillusioned soldier and a sweet but delusional woman in this romantic comedy-drama from director Andrei Konchalovsky. A small Russian mental hospital near the border of Chechnya is home to a group of eccentric but harmless patients, among them Janna (Julia Vysotsky), a cheerful woman who likes to play accordion and is convinced pop singer Bryan Adams is her fiancé; over-excitable Vika (Marina Politseymako); and highly prolific would-be poet Ali (Stanislav Varkki). When fighting between Russians and Chechens flares up and bombing threatens the hospital, the doctor in charge (Vladas Bagdonas) goes out to find vehicles to evacuate his patients, briefly leaving them to their own devices. While the doctor is away, a group of Chechen soldiers happen upon the hospital, but they seemingly mean no harm to the patients, and one of them, Ahmed (Sultan Islamov), starts flirting with Janna. Janna quickly falls head over heels for Ahmed, and leaves behind her treasured Bryan Adams poster to be with him...though in her mind, Adams isn't about to give up her affections without a fight. As love grows between them, Ahmed finds himself wondering just who is supposed to be sane -- the lunatics at the hospital, or the soldiers fighting a pointless war. Bryan Adams appears as himself in Dom Durakov, and sings several songs, including his international hit "Have You Ever Really Loved a Woman."

Bryan Adams
as Himself

Alexander Seleznev
as Feodor the Drunk

Denis Nadtochi
as Vitek the Male Nurse
View All

Critic Reviews for House of Fools

Vysotsky projects an essential sunniness that helps keep the film from turning maudlin.

It may be based on a true story, but another filmmaker told it before -- and better.

It ultimately feels like a folly that sounded great in the filmmaker's head, so great that he had to be put on screen, where it flounders around with no small degree of embarrassment.

The use of Bryan Adams as the madwoman's imagined paramour is indicative of just how mediocre this movie is.

There's not much to Konchalovsky's tale ... but it's often beautifully told; a gentle fantasy of a harsh time.

With its cast of nauseatingly lovable lunatics, House of Fools may make you feel like you've been tricked into suffering through the Kevin Spacey flick K-Pax with subtitles.

It's hard to dislike a movie that identifies Russian mental patients as Bryan Adams' core audience.

Janna, played with endearing toughness by Julia Vysotsky, is the heart of this film.

Unbelievably insensitive in its depiction of the mentally ill.

It's an odd mix to combine the harsh reality of war with the surreal world of mental patients. This makes for a bizarre movie, but it has some really tender moments.

War is insane. Insane people are cute. Bryan Adams is God. There, now that you've got these three principles down, you don't need to see House of Fools.

Audience Reviews for House of Fools

A Russian docu-drama that's intriguing for a number of reasons, not the least of which is the BEAUTIFUL and talented Yuliya Vysotskaya. Plus, it's a true story. And it's got Bryan Adams (yes, THAT Bryan Adams!).

I don't understand the naysayers reviewing this film. It is quite the interesting slice of life and who would expect...Bryan Adams playing a cameo in a Russian film?

A very cliched view of a mental hospital that happens to get caught up in the Russian-Chechen war. Occasionally amusing war humour and an impressive helicopter crash is all this movie has to offer.