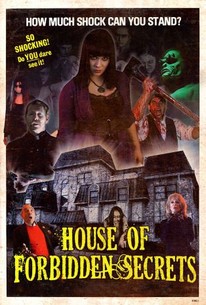 Jacob Hunt has had some very bad breaks in life. His wife left him, his friends have all abandoned him and his children barely see him. He needs a break to get back on his feet. Jacob is given an amazing gift when he is called to be the overnight security at the old Shadowview Manor. It's been turned into a commercial office and retail building. The tenants hear strange things at night. Some claim to see strange people. Jacob is about to learn that nights around the Shadowview Manor contain many secrets. A dark past that is breaking through the boundaries of time, leaking into this dimension. And on Jacob's first night on the job, it's the anniversary of the dark tragedy that has stained the building. All those secrets finally break down the veil between worlds and unleash an evil curse that will destroy everyone in the building if it's not stopped. (C) Official Site

There are no critic reviews yet for House of Forbidden Secrets. Keep checking Rotten Tomatoes for updates!

There are no featured audience reviews yet. Click the link below to see what others say about House of Forbidden Secrets!