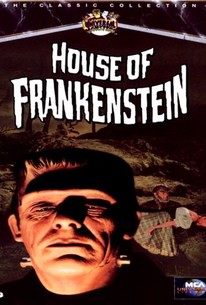 In many ways the most endearing of Universal's B-grade "monster rallies" of the 1940s, House of Frankenstein manages within its 70-minute time span to make room for Frankenstein's monster (Glenn Strange), Dracula (John Carradine) the Wolf Man (Lon Chaney Jr.), and a couple of new recruits, mad scientist Boris Karloff and demented hunchback J. Carroll Naish. Escaping from prison, Karloff vows to continue his diabolical efforts to emulate Dr. Frankenstein's "eternal life" experiments; he also swears vengeance on the three men (Sig Ruman, Frank Reicher and Michael Mark) who were responsible for sending him to prison. With the help of fellow escapee Naish, Karloff murders a travelling-carnival impresario (George Zucco) and assumes his identity. He travels first to the village where Ruman is burgomaster. Since his carnival is a "chamber of horrors", Karloff utilizes one of those horrors--Count Dracula--to settle his account with Ruman. Dracula does so, but dies when the first rays of sunlight stream across his body. En route to the next village, Naish gives shelter to runaway gypsy girl Elena Verdugo, who joins the caravan (though she remains incredibly naive concerning Karloff's intentions!) Coming to the village when the Frankenstein monster and the Wolfman were presumably drowned at the end of Frankenstein Meets the Wolfman (1944), Karloff revives the latter, who when he's not baying at the moon is the comparatively good-looking Lawrence Talbot. Karloff secures Talbot's cooperation by promising to perform some brain surgery that will relieve him of his lycanthropy. Later on, Karloff kidnaps and kills his other enemies Mark and Reicher, intending to use their brains to cure Talbot and to reactivate the Frankenstein monster. Jealous of Verdugo's attentions towards Talbot, Naish rebels against Karloff, and is killed for his troubles. Talbot turns into the Wolfman, whereupon Verdugo kills him before expiring herself. And Karloff, rendered immobile by the requisite attack of angry villagers, is dragged by the lumbering Monster into a pit of quicksand. Thus House of Frankenstein has something in common with Hamlet: No one is left alive at fade-out time. It's to scenarist Robert Siodmak's credit that he was able to fashion a coherent screenplay out of the crazy-quilt of copyrighted horror characters handed to him by Universal Pictures.

Critic Reviews for House of Frankenstein

Calling all monsters! Universal trots most of them out for this sequel to "Frankenstein Meets the Wolf Man." And, the results were slightly better than the 1943 effort. Boris Karloff plays a mad scientist bent on revenge.

71 incomprehensible minutes of the very worst Universal had to offer.

This one is just bad.

The horror story makes absolutely no sense, but it is so nutty that it makes for a diverting watch.

House of Frankenstein -- choppy though it is -- has its pleasures.

A wonderful Universal B-horror; the first of the all-star monster fests. Lots of fun with J. Carrol Naish almost stealing the show as the hunchback Daniel.

Audience Reviews for House of Frankenstein

Except for Boris Karloff (who proves herein that he can handle lines with the best of them) and J.Carrol Naish, the writing of this dreck shipwrecks everyone involved. Chaney's Wolfman is a joke, Frankenstein's monster "runs amok" for perhaps 3 minutes, maybe even less, and Carradine's Dracula is an insult to the legend. Pass, pass, pass!

Gathering together the universal monsters to get revenge on your enemies sounds like a good plan, but if you think about it for a while you will realize that that's just stupid. The writers of this movie didn't think that long about it unfortunately.

ive noticed in these old movies that have more than one moster they deal with them one at a time indstead of combining the problems to make it more indepth.

Frankenstein died with a whimper in this piece of garbage. Dr. Niemann (Boris Karloff) escapes from prison and has a run in with Dracula (who's in the film for 10 minutes in a stupid sub-plot), stumbles onto the Wolfman who wants help, and attempts to revitalize Frankenstein. Crap, crap, crap. The only reason this thing gets one whole star is because Karloff is in it. Otherwise it's pure trash. Not as bad as House of Dracula, but it still sucks.