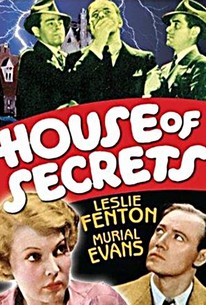 A young man is in danger of losing his inheritance in this muddled thriller from the waning Chesterfield Motion Picture Corp., a remake of the company's first talkie. After rescuing a pretty girl from a brute while crossing the English channel, Barry Wilding (Leslie Fenton) learns that he has inherited the large Hawk's Nest estate on the condition that he never sell the place. He also discovers that the girl, Julie Kenmore (Muriel Evans), lives on the estate along with her father (Morgan Wallace), a noted scientist. After agreeing that Julie and her father may remain on the estate for at least six months, Barry is dumbfounded when the girl prohibits him from visiting her. He does so anyway and is promptly confronted by nasty American gangster Dan Wharton (Noel Madison). What exactly is the gang lord doing at Hawk's Nest and why are the British authorities so reluctant to help the troubled heir? The answer, as Barry discovers soon enough, has something to do with a treasure hidden on the estate.

Matty Kemp
as Man on Ship

Critic Reviews for House of Secrets

There are no critic reviews yet for House of Secrets. Keep checking Rotten Tomatoes for updates!

Audience Reviews for House of Secrets

There are no featured audience reviews yet. Click the link below to see what others say about House of Secrets!