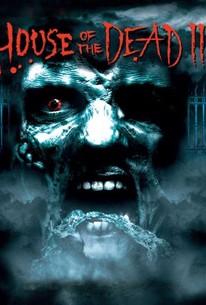 House of the Dead 2 Photos

A crack commando squad investigates a college campus inflected with a zombie virus in House of the Dead 2, a film that boldly continues where Uwe Boll's inept first film left off. When a demented professor (Sid Haig) starts to conduct experiments on fresh corpses, all hell breaks loose at Cuesta Verde University as hordes of undead college kids roam the secluded school. Now it's up to government agents Alex (Emmanuelle Vaugier) and Ellis (Ed Quinn) to find the zombie blood strain that initially started the epidemic so that a cure can be discovered. In their way are a student body of flesh-eating zombies and an inexperienced army unit headed by Dalton (Sticky Fingaz) that is assigned to aide them. Broadcast as a Sci-fi Channel exclusive in early 2006, the film was released to DVD in all its gory goodness shortly thereafter.

Mark A. Altman
as Interrogator

Sean Jordan
as Sean of the Dead

Sean Kinney
as Quarterback
View All

News & Interviews for House of the Dead 2

View All House of the Dead 2 News

Critic Reviews for House of the Dead 2

.. at least it is superior to its predecessor ... which, evidently, is not saying much. [Full review in Spanish]

...just as inept as its predecessor...

The movie might be schlock, but at least it's good-looking B-schlock.

Audience Reviews for House of the Dead 2

Overall this is a better made film compared to the first one, but not as fun. It's more of traditional zombie film and less of a stylized action-fest but still not a great film. It's a little silly at times but it doesn't sink to the hilarious depths of Uwe Boll's effort.

Lot better than the first but thats not saying much.

Once it gets past its first twenty minutes, it's clear House of the Dead 2 is nowhere near as terrible as its predecessor. Yes, it's a very bad movie, with tense moments simply not registering on the fright thermometer and zombies just as silly (and boring) as they come, but... it simply doesn't live up to the supreme shittiness of the first one, which ultimately makes it a serious waste of time. Yawn.

I preferred the first, this tries to take it self seriously when it is so cheesey beyond belief. Based on a shooting game and barely has any shooting!?

House of the Dead 2 Quotes