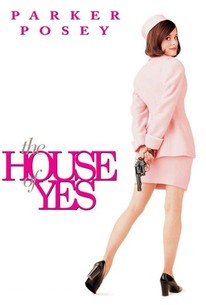 This offbeat comedy is an adaptation of Wendy MacLeod's play about the affluent, dysfunctional Pascal family as they prepare for a Thanksgiving dinner. The mentally disturbed daughter (Parker Posey), who identifies with Jacqueline Kennedy Onassis, has been involved in an incestuous relationship with her twin brother Marty (Josh Hamilton) for years. But now Marty is bringing his fiancee Lesley (Tori Spelling) home for the holidays to meet his family, including his sister, his twisted mother (Genevieve Bujold), and his younger brother (Freddie Prinze Jr.). After the electricity goes out, tensions escalate. Parker Posey won the 1997 Sundance Film Festival Special Jury Award.

Critic Reviews for The House of Yes

"The House of Yes'' is a comedy. And a pretty funny one, too.

Unless you think drawing-room re-enactments of JFK's assassination beat Pictionary as a party game, it's best to say no to the achingly arch comic satire The House of Yes.

Bujold has the frazzled hauteur of an aging, neglected star, and Spelling is nicely glazed, studiously artless. But the film is keyed to Posey's performance: perfectly brittle, faultlessly false.

[Waters] manages to open up the text while maintaining its perilous mix of arch wit, pathos and suspense.

There's something quite lethal about Parker Posey in pearls, and for that inspiration director Mark Waters deserves our gratitude.

This is a definitive Posey performance: wide-eyed, smiling and ultrafeminine, but plastic and cold as a store mannequin.

Incest is the core of dysfunctional family dramedy.

Bujold is as good as ever, but the real surprise here is Spelling: Slack-jawed and dewy-eyed, lids forever at half-mast, she's perfectly cast as a lamb among wolves, and her naivete is strangely affecting.

A fierce piece of farce and sharp as a kitchen knife.

Offers more than its share of tartly biting zingers, dropped to maximum comic effect by the letter-perfect Posey.

So light it almost floats away were it not somewhat anchored by the performances of Posey, Bujold and Spelling.

Audience Reviews for The House of Yes

"The House of Yes" is a little gem of an indie film, which alternates between crass satire and dark comedy with seeming ease. The set-up of the film has us transported to a family manor on the outskirts of Washington D.C. where Jackie-O, her brother Anthony, and their mother await the arrival of Jackie's twin, Marty, and his fiancee, Lesly. These WASPs turn out to be some of the sickest people around, as they hide secrets, manipulate each other, incite violence, and revel in their insanity. Jackie-O especially has problems coping with her brother's relationship, and her jealousy is evident from their very first meeting. Though the plot of this film is nearly nonexistent at times, it's the characters that we really care about, or more aptly, whether or not Jackie-O will manipulate and seduce her brother like she once has before. This film is quite dark, but also quite inspired. It's uncomfortably funny, in the darkest possible terms, and features some great performances, especially Parker Posey, Queen of Indies. A must see for nineties indie junkies, and Parker Posey's minions.

It's scary how believably Marty (and the viewer) gets sucked into the hermetically loving vacuum of family.

This film didn't do much for me. A brother comes home with his finance to meet his family, a sister who thinks she is Jackie Kennedy and is in love (More then Brother Sister type love) with her brother, flips out and tries to do away with the fiancée. Its from the 1997 Toronto International Film Festival. One of the few not so good movies from this festival, but you might find it enjoyable and funny. Me well I can only muster up 2 1/2 stars.

A highly variable movie with its own individual peaks and valleys. It's a pleasure to watch indie queen Parker Posey act, for sure. It is she that gels the humor in just the right way so that it's not too awkward or too uncomfortable. The relationship is just messed up enough that it works. But the movie is too long, and too little amount of events happen that make it a solidly "good" movie. The story is indie original, but it's not a completely well-thought out one. The tone is there and strong, but the finely honed details are lacking. Sadistic, vicious, ridiculous, but uneven.

The House of Yes Quotes