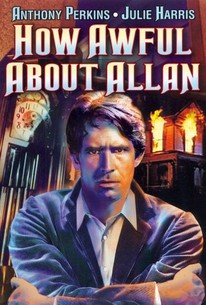 How Awful About Allan Photos

Director Curtis Harrington (The Killing Kind) teams with screenwriter Henry Farrell (Hush...Hush, Sweet Charlotte) for this quietly disturbing tale of a man driven to psychosomatic blindness by a horrific family tragedy. Unable to cope with the fact that he has been blamed for the fire that killed his father and disfigured his sister (Julie Harris), psychologically unsound Allan (Anthony Perkins) is committed to a mental institution. Some time later, Allan is deemed fit for release and sent to live at his sister's house. But Allan's sister is far from happy to have her brother back home, and begins to sadistically toy with his fragile psyche to the point that he starts hearing disembodied voices and sensing an ominous presence. Could it be that Allan's father is actually reaching out for revenge from beyond the grave, or have Allan's sister's continued attempts to wear at her ailing brother's fragile psyche finally had the intended results.

Critic Reviews for How Awful About Allan

The made-for-TV movie starred Anthony Perkins, in his only TV movie, with him effectively playing another over-the-top psycho role.

Audience Reviews for How Awful About Allan

Here's the idea: what if we team psychologically sensitive Anthony Perkins (of "Psycho" fame) with psychologically sensitive Julie Harris (of "The Haunting" fame) in a big, old dark house and whisper "who dat?" over and over and see what happens? And that's the whole ticket here. The upshot is predictable, yes, but there are moments of creepy goodness. Still, save this for later. Much later.

Easily solved mystery but what a great cast!

A predictable suspense story, but it's always cool to see Perkins play a psycho, right?

How Awful About Allan Quotes