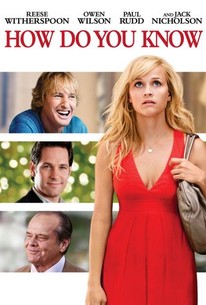 Critics Consensus: How Do You Know boasts a quartet of likeable leads -- and they deserve better than this glib, overlong misfire from writer/director James L. Brooks.

Critics Consensus: How Do You Know boasts a quartet of likeable leads -- and they deserve better than this glib, overlong misfire from writer/director James L. Brooks.

Critic Consensus: How Do You Know boasts a quartet of likeable leads -- and they deserve better than this glib, overlong misfire from writer/director James L. Brooks.

How Do You Know Videos

How Do You Know Photos

Director James L. Brooks returns to the helm for this ensemble comedy starring Reese Witherspoon, Jack Nicholson, Paul Rudd, and Owen Wilson, which centers on the story of a passionate athlete who finds herself romantically torn between a narcissistic baseball star and a straight-laced businessman. As far back as Lisa (Witherspoon) can remember, her life has been defined by sports. Then, in the blink of an eye, she's cut from the team. With her identity in crisis as she attempts to regain her footing in life, Lisa begins dating Matty (Wilson), a Major League Baseball pitcher and notorious womanizer. Meanwhile, terminally honest businessman George (Rudd) finds himself on the road to financial ruin or worse after being wrongly implicated in a financial crime. As George struggles to clear his name and reconcile his turbulent relationship with his father, Charles (Nicholson), a chance meeting with Lisa at the lowest point in both of their lives leaves him optimistic that things may work out after all. Meanwhile, Lisa and George both realize that the only thing that's certain about the future is that we never know what fate has in store for us. ~ Jason Buchanan, Rovi

Will Blagrove
as Matty's Teammate

David A. Gregory
as Matty's Teammate

Mary Gallagher
as Other Female Coach

News & Interviews for How Do You Know

View All How Do You Know News

Critic Reviews for How Do You Know

Three likeable stars and Jack Nicholson. Can you take this foursome and make a film that makes you want to barf the moment it opens? Yes, if the film is How Do You Know.

Some of the bits are funny, every now and then they're sweet, the performances are OK and really, with this much talent involved, it's hard not to be disappointed in that.

Though neither mindless nor insensitive, this interminable movie falls far short of Brooks's best work, which is to say Broadcast News and As Good As It Gets.

Though the film was a box-office dud in the US, Brooks delivers an amusing and consistenly engaging relationship piece that is a cut above the standard romantic comedy.

Instead of juicing it up with jokes, Brooks has inadvertently given us another story of the American condition, which is that of absolute and incorrigible self-centredness.

A fatuous and depressing parade of nothingness...

At least a modest disappointment for those of us who consider ourselves fans of James L. Brooks.

Earnest and watchable, there are some incredibly funny moments, but in the end, this isn't anything more than a middle-of-the-road rom-com.

Brooks wants to make a contemporary relationship film and a topical one about the financial crisis and winds up failing on both sides.

I'm not sure the movie will end up earning back its stars' huge salaries, but you definitely can't argue they didn't earn them.

It's not enough to merely swoon over Witherspoon. The movie's entirely too long and leaden to get by on that alone.

"How Do You Know" is a complete misfire from famed writer/director James L. Brooks.

Audience Reviews for How Do You Know

Rom com with a good cast. Lisa finds herself without a job, moves in with her boyfriend then realises she is attracted someone else.

Hmm, well, based on the talent involved, this had the possibility of being amazing. Considering the reception this film got, I was a little befuddled, but was hoping to be pleasantly surprised. Well, I've seen it now, and....the film is not terrible, just terribly mediocre. The main issues are that the script is just dull, the characters aren't really all that interesting, and everyone just looks bored and uninspired...especially Jack, who pretty much just phones it in and plays himself, but goes by the name of Charles. Also, this film, like many of Brooks's, goes on far too long, but here it's not worth it because the film isn't all that interesting. It's not a complete loss though. Reese and Rudd are actually decent, and I kind of liked their characters, but I couldn't stand Wilson here. He's just too frustrating and a little of his character goes a long way. Plus, there are a few good scenes, but overall, this film just seems all over the place, messy, and in need of some revisions. If you feel you need to see this, then see it, but catch it on tv or something. There are far worse films that are just as sweet and well-meaning, but this one was just really came off all the worse because there's some great people involved.

Lisa: Never drink to feel better; drink to feel even better. How Do You Know is the story of Lisa (played wonderfully by the beautiful Reese Witherspoon) who got cut from her professional softball team and confused about her relationship with major league pitcher Matty (played by Owen Wilson in his usual knuckle-head and awkward role) and doesn't quite know what she's doing with her life. Enter corporate executive George (played by Paul Rudd in a surprisingly real and astounding performance), who is being investigated for something along with his father Charles (amazingly played by the legendary Jack Nicholson in another pitch-perfect role). The real scene stealer is Kathryn Hahn, who plays George's loyal, pregnant, and honest secretary Annie in her most hilarious role since 2008's hit comedy Step Brothers, where she played John C. Reily's love interest. Put all of this together, and we now have ourselves a James L. Brooks movie. Read the full review at www.CreedsDelight.com

Cast: Reese Witherspoon, Paul Rudd, Owen Wilson, Jack Nicholson, Kathryn Hahn, Mark Linn-Baker, Lenny Venito, Molly Price, Shelley Conn, Tony Shalhoub Director: James L. Brooks Summary: Feeling spurned after being cut from the national team due to her age, newly single softball player Lisa (Reese Witherspoon) finds herself in the middle of a heated love triangle, as a professional baseball player (Owen Wilson) and a business executive (Paul Rudd) compete for her affections. My Thoughts: "The film is a mess. It's such a disappointment because I had a little bit of high hopes considering the cast. I really don't understand what the film was suppose to be about. In the end, I think it was "How Do You Know", when you are in love. I loved the film 'Overnight Delivery', and I was hoping to catch a glimpse of that chemistry between Reese and Rudd again in this film. Unfortunately I think the writing put that spark out for this film. I did enjoy Paul and Kathryn's screen time. She was funny in the movie and those scenes are my favorite in the film. The rest is a blur that I will most likely never remember considering the film is forgettable."

How Do You Know Quotes