How Green Was My Valley1941 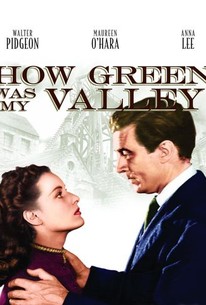 Critics Consensus: Though it perhaps strays into overly maudlin territory, this working-class drama is saved by a solid cast and director John Ford's unmistakeable style.

Critics Consensus: Though it perhaps strays into overly maudlin territory, this working-class drama is saved by a solid cast and director John Ford's unmistakeable style.

Critic Consensus: Though it perhaps strays into overly maudlin territory, this working-class drama is saved by a solid cast and director John Ford's unmistakeable style.

How Green Was My Valley Photos

Spanning 50 years, director John Ford's How Green Was My Valley revolves around the life of the Morgans, a Welsh mining family, as told through the eyes of its youngest child Huw (Roddy McDowall). Over the years, the family struggles to survive through unionization, strikes, and child abuse. As they do so, their hometown and its culture begins to slowly decline. Donald Crisp portrays Gwilym, the patriarch of the Morgan household, who dreams of a better life for young Huw. Based on the novel of the same name by Richard Llewellyn, How Green Was My Valley won five Academy Awards in 1941, including Best Director, Best Supporting Actor (Crisp), Best Art Director, Best Cinematography, and Best Picture (beating Citizen Kane). The book was later adapted into a 1975 BBC miniseries. ~ Matthew Tobey, Rovi

The Welsh Singers
as Singer

J.M. Kerrigan
as Tailor
View All

Critic Reviews for How Green Was My Valley

Captures an idyll of youth that has been lost to the corrosive practices of modern business.

One of the outstanding film productions of the year.

The acting is strong, and Arthur Miller's Oscar-winning photography gives the images a spooky luster, but a little bit of Ford's salt-of-the-earth piety goes an awfully long way.

Because his recollections ring true, they are certain to evoke a similar nostalgia in all but the most slab-sided of moviegoers.

This John Huston film [is] typically epic with a faithful screenplay to Richard Llewellyn's famous novel.

How Green Was My Valley is one of the year's better films, a sure-fire critic's picture and, unlike most features that draw kudos from crix, this one will also do business.

Strangely, a sizable portion of the plot occurs without Huw's direct involvement, which makes his narration somewhat flawed, since he's not privy to all the details.

One of the most beautifully-shot films of the 1940s... one of the highest achievements of John Ford's fascination with the ebb and flow of life in a small community.

You are left with a memory of something as fine as any motion picture could hope to be.

It is a great picture, a poignant, emotion-stirring drama.

The last John Ford movie is something exquisite and of a supreme artistic quality. [Full Review in Spanish]

The film is beautifully played, with Donald Crisp as the humorous patriarch of the mining village dominating the screen with tough sensibility.

Audience Reviews for How Green Was My Valley

A boy comes of age in a Welsh village. A sprawling, ambitious epic of a film, How Green Was My Valley wreaks of nostalgia, in the voice over, in the salt-of-the-earth characters, and the cursory treatment it gives its themes. While many of these nostalgia films achieve a universality, I found the characters ultimately unrealized and unexplored. For example, Angharad's love affair with the preacher, which is aborted by her marriage to an upper class man, is portrayed only slightly, and the next time we see her, she is miserable. But what about the interceding time? What about the preacher's life between then and now? Whereas a good epic like War and Peace leaves none of its main characters ignored, this one satisfies itself with episodic fragments. Overall, epics like this one are tricky, and I think director John Ford bit off more that he could chew.

If I'm not mistaken, this film is probably best remembered as the won that scored an upset victory over Citizen Kane at the Oscars by nabbing five out of the ten awards it was nominated for (the most signicant being best Picture, Best Director, Best Cinematography (black and white), and Best Art Direction (black and white). Donald Crisp also won for his acting, but that wasn't an upset over CK. The story here spans a few decades and concerns a working class mining family named the Millers in Wales in the early 20th Century in a small community going through significant change. The story is told from the perspective of the youngest Miller, Huw (a very young, but impressive Roddy McDowall). Maureen O'Hara plays his sister, and she's also quite good, but then again, when is she not? A lot of what goes on in the film is still relatable- socio economic change and hardships, and they affect they have on family life and dynamics, but, to be honest, as decent as this film is, it's not really all that special or significant. Ford has never made a film I haven't gotten some sort of enjoyment out of, but this is one of his weaker ones for me. Also,, I really start to lose interest after a while and become fidgety. The film never totally failed to lose my interest, but still, boredom began to set in. That aside, the performances are good, the cinematography is pretty nice, and the music (especially the music) is quite wonderful. This film isn't amazing, but it's still pretty decently made and an okay variation on a theme, despite its flaws.

Other than getting to see a young Roddy McDowall, there wasn't anything of interest in this movie. I did just watch the beginning, really, but it's a very long movie spanning 50s years of the character's life! And what a boring life it was. Maybe some people like these real life dramas, but not me.

It's a rare quality in film to be able to look back at the safety of youth and remember long dead family members in their healthiest days, but director John Ford does the near impossible thing of inspiring nostalgia for the good old days we never lived. Roddy McDowall stars as Huw Morgan, the youngest son in a big family of welsh coal miners. With the same rose-colored glasses all older people view their youth, the adult Huw recalls his childhood in idealized fashion, where family members don't fight and the men come home from work with a song on their lips. In a little picturesque coal mining town in Wales, the turn-of-the-century family all live and work together- a household of 9 (6 boys and 1 daughter) where all the men work in the mine and turn their weekly wages into the family pot. All except young Huw, who's much younger than the rest. Things all start to go downhill for the family when the miner's wages are cut and the workers decide to go on strike. The american minister (Walter Pidgeon- at least I think he's supposed to be american, as he doesn't attempt any sort of accent) is a gentle and duty-bound man who tries to keep his feelings for the Morgans daughter (Maureen O'Hara) in check. The trials and tribulations of this family at times remind me of a welsh version of "A Tree Grow in Brooklyn", only shot better. Seriously, the sets and photography are just beautiful. It's easy to see why it won the academy award that year (even beating out the greatest movie of all time, Citizen Kane).

How Green Was My Valley Quotes