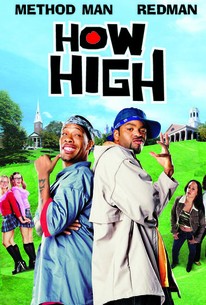 A pair of real-life multi-platinum rap artists star in this genial substance abuse comedy recalling the pro-marijuana work of Cheech and Chong and such films as Half Baked (1998). Silas (Method Man) and Jamal (Redman) are buddies who enjoy smoking voluminous amounts of the illegal plant. They end up in the possession of some magical weed that enhances their brainpower during college entrance exams, thus enabling them to enter that esteemed institution of learning, Harvard University. Once firmly ensconced in the halls of academia, however, the pals run out of their supernatural supply and are forced to get creative in the pursuit of an Ivy League degree. Included in their narcotic-addled plans: smoking the bones of dead president John Quincy Adams. Produced by Danny DeVito's Jersey Films, How High (2001) co-stars Obba Babatunde, Fred Willard, and Hector Elizondo.

Alan Shearer
as I Need Money

Al Shearer
as I Need Money

Sacha Kemp
as Hella Back

Anthony DeSantis
as Satanist
View All

Critic Reviews for How High

Despite the comedy's reliance on drug humor, first-time director Jesse Dylan is actually less interested in getting high than in seeing how low he can go.

For better or for worse, How High knows what its audience wants and serves it to them, straight up, without any sort of moral or ethical chaser.

Too lazy to be a comedy, too conventional to be a head movie.

Features a fine mix of several generations of comic talent plus a terrific soundtrack from its stars.

The overlong, messy and chaotic film is not funny and has no social redeeming value.

Silly, sloppy, and liberated from any sense of pacing or plot

Sinfully tasteless cinema was everywhere in 2001 - but this movie is so bad it's Freudian.

As it stands, a movie like How High does nothing more than perpetuate the belief that marijuana is enjoyed solely by idiots.

Not all the gags work, not all the gross-outs serve the greater good, but How High is funny, quick, and the very definition of a pleasant surprise.

Audience Reviews for How High

It's good because it's that stupid.....if that makes any sense.

Aside from the words "ridiculous fun" there's not much else I can really say to describe How High. It's definitely a must for Wu-Tang fans and fans of pot comedy but when you're dealing with a movie about two potheads who get admitted and ace classes at Harvard because of the ghost of their friends who appears whenever they smoke a certain kind of strain of pot you kind of know what you're dealing with. If you're not watching How High under the influence you're definitely doing something wrong...

How high can you throw me?

wow there is nothing funny about this movie... these assholes should should just give up man