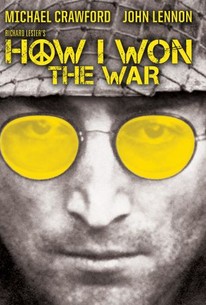 How I Won the War Photos

Among the first of the late 60s anti-war films that reflected growing concern over the Vietnam War, How I Won the War takes a cold, dark look at the Good War, World War II. In adapting Patrick Ryan's 1963 novel, screenwriter Charles Wood and director Richard Lester offered a narrative fractured by characters making side comments to the camera, stylized cinematography, inserts of newsreel war footage, and plenty of absurdist humor and slapstick. Ernest Goodbody (Michael Crawford) is a bumbling British officer who manages to get most of his small company of musketeers killed while on a mission in North Africa to set up a cricket pitch behind enemy lines for officers of the advancing British army. The rest of the company dies in an ensuing campaign in Europe near the war's end, but all of the men continue to march along, appearing as monochromatic ghosts. (Original prints of the film intercut real battle footage tinted to match the color of the soon-to-be ghost soldier. Some prints of the film, including one shown on Turner Classic Movies, present the newsreel shots in black and white, undercutting the stylized touch.) The story is framed as a flashback, with Goodbody relating his version of events to a German officer (Karl Michael Vogler), while the real version of events, demonstrating Goodbody's ineptitude, plays out on screen. Among the supporting players are John Lennon, who had worked with Lester on A Hard Day's Night and Help; Roy Kinnear, a Lester regular, as a fat soldier who is certain his wife is cheating on him; Jack MacGowran as the troop's designated fool, and Michael Hordern as a general almost as oblivious to his suffering men as Goodbody.

Jack May
as Toby

Pauline Taylor
as Woman In Desert

Norman Chappell
as Soldier at Alamein

Kenneth Colley
as Replacement
View All

News & Interviews for How I Won the War

Total Recall: Across the Universe And The Beatles On Film

View All How I Won the War News

Critic Reviews for How I Won the War

The first problem with How I Won the War is that the basic farce is not all that funny.

Patrick Ryan's novel has been adapted into a screenplay which, as directed by Richard Lester, substitutes motion for emotion, reeling for feeling, and crude slapstick for telling satire.

I got no impression from this film that Lester really, personally, cares very strongly one way or the other about war. It was only a currently fashionable subject, a good excuse to make a movie.

Lester's op-pop style, jump cutting from incident to incident, seems too inherently cheerful for the material, which features fountains of stage blood.

We've been handed this kind of tripe in every Terry Thomas, Peter Sellers, Martin and Lewis, Laurel and Hardy Army spoof ever made.

It suggests an overaged boyishness almost incapable of relating to the hard-nosed, dry, sardonic war films supposedly under attack here.

A film so critical of others' attitudes should perhaps have given more positive vetting to its own.

This seemingly incongruous mixture will work for some viewers, and, though the seriousness of Lester's intent may not be appreciated by everyone, most should at least find something here to make them laugh.

It still has an edge most films would shy away from. It's brilliant, bitter, defiant and angry.

Audience Reviews for How I Won the War

George Bernard Shaw once wrote that England and America are two countries separated by a common language. Nowhere is that more apparent than here in How I Won the War. The accents are so thick and the humor so uniquely British that even when I could understand it I couldn't understand it.

How I Won the War Quotes