How the Garcia Girls Spent Their Summer (2008) 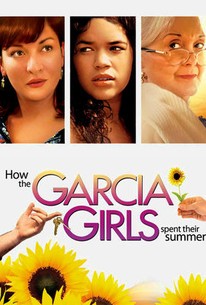 Critics Consensus: At turns comical and sincere, Garcia Girls is an intelligent and intimate portrait of three women finding love at different ages.

Critics Consensus: At turns comical and sincere, Garcia Girls is an intelligent and intimate portrait of three women finding love at different ages.

Critic Consensus: At turns comical and sincere, Garcia Girls is an intelligent and intimate portrait of three women finding love at different ages.

How the Garcia Girls Spent Their Summer Photos

Georgina Garcia Riedel's comedy How the Garcia Girls Spent Their Summer stars Lucy Gallardo, Elizabeth Peña, and America Ferrara as three generations in a family. Teenager Blanca (Ferrara) detests the boys in her small town and takes on a boyfriend from another town in the hopes that he might be different. Her mother, Rosa (Peña), is so sexually frustrated that she begins to put the moves on her best friend's husband, a man who has had an ongoing problem with sexual fidelity. Rosa's mother, Dona (Gallardo), embarrasses her daughter by refusing to settle down into a quiet elderly life. The 80-year-old takes driving lessons from a local gardener, although their relationship turns out to be far more. This film was screened in competition at the 2005 Sundance Film Festival.

Victor Wolf
as Oswaldo
View All

Critic Reviews for How the Garcia Girls Spent Their Summer

While there are rewards to sticking with this tempest-in-teapot saga of sexual awakening across three family generations of Mexican-American women, its pacing is leisurely to the brink of stasis.

Another victory for a first-time, full-length feature filmmaker with a curious, inventive eye and an unsparing point of view.

Riedel reveals herself to be a novice filmmaker, especially in the pacing of most scenes.

Like Blanca and her friends, walking languidly down the street, then spontaneousy grabbing a shopping cart for a ride, Reidel plays with the rhythm of her enjoyably unhurried tale.

Leisurely paced but lovely and touching.

The film is sensitively told and appealingly bittersweet, though the story at times meanders and loses its way.

Stylistically, the film takes risks before veering into an odd sort of studied artiness.

Pena has a great role and delivers her best performance since Lone Star in 1996.

A lovingly crafted portrait of a kind of life not often seen on the big screen.

Although the story is overly familiar, Riedel's evocation of small-town life rings true.

This is a movie with wonderful, strong performances from three very talented women.

It's a smart little film, although there are some odd cinematographic moments --- curious, at best. And at two hours plus, the movie runs at least 20 minutes too long.

Audience Reviews for How the Garcia Girls Spent Their Summer

It was an interesting story about 3 generations of women. Gotta love AZ!

Excellent film about three generations of Latina women struggling with their sexuality. Contrary to what young people think, old people need love and comfort as well. There were moments that made this viewer cringe, (no, not the sex, which was pretty tame) and others that had me laughing out loud. In this small town, everyone's secrets are well-known and the options for love are limited. But each of these women learns something about herself and about each other that just resonated for this viewer. The three lead actresses, America Ferrera (Blanca), Elizabeth Pena (Lolita), and Lucy Gallardo (Dona Geneveva) were marvelous. America is fast becoming a favorite and I am glad to see her tackling such meaty roles. She has a classic beauty that I find entrancing. A real woman, indeed.

Great movie. An interesting story plot that surrounds the everyday lives of a family of three Hispanic women: a grandmother, mother, and a granddaugther. Great cast- America Ferrera and Elizabeth Pena are phenomenal. Definitely worth seeing.

How the Garcia Girls Spent Their Summer Quotes