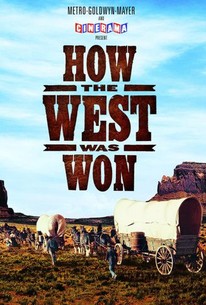 How the West Was Won Photos

Filmed in panoramic Cinerama, this star-studded, epic Western adventure is a true cinematic classic. Three legendary directors (Henry Hathaway, John Ford and George Marshall) combine their skills to tell the story of three families and their travels from the Erie Canal to California between 1839 and 1889. Spencer Tracy narrates the film, which cost an estimated $15 million to complete. Westward expansion shows scenes of the Indian's sorrow, the white man's greed, river pirates, outlaws, lawmen, and life and death on the Western plains. Dozens of marquee names worked with over 12,000 extras, 630 horses, hundreds of horse drawn wagons, and a stampede of 2,000 buffalo. The human cost of the concept of Manifest Destiny is revealed in all its colorful and violent glory. How the West Was Won garnered three Oscars, for screenplay, film editing, and sound production.

Barry Harvey
as His Son

Jamie Ross
as His Son

Spencer Tracy
as Narrator
View All

Critic Reviews for How the West Was Won

In all the gargantuousness, however there are redeemable moments, especially in Ford's oddly scaled Civil War episode.

Here, then, is a film with apparently something for everyone. Certainly its team of four ace cameramen have provided a full quota of visual splendours and the rich colour definition in the long shots communicates an authentic thrill of pleasure.

It would be hard to imagine a subject which lends itself more strikingly to the wide-screen process than this yarn of the pioneers who opened the American West.

The main problem remains the impossibility of subjecting a film that is fundamentally about landscape and history to the demands of such a coarse dramatic form.

It should be called "How the West Was Done-to Death."

A buffalo stampede and a raft caught in some terrifying rapids did make their point to my more primitive nerve centers, but the rest was the old stuff directed and acted by the old-stuffers and on a level considerably below their best performances.

It really is true to say they don't make them like this any more.

Delivered big with breathtaking location work and an all-star cast...

A story as big, as brash, and as exciting as the west itself.

There is no denying the spectacle, the adventure, and the romance in How the West Was Won.

People have always been, and always will be, impressed with big movies; this Western was one of the very biggest.

Audience Reviews for How the West Was Won

Pratically defining the word sprawling this phenomenal drama of the settling of the west is so much more than a conventional western. Directed by three top flight directors all three segments have a slightly different feel but join together into a harmonious whole. Again the phrase once in a lifetime cast could have been invented for this film with a star of some magnitude in almost every role, all of whom give good performances. The real standouts in terms of acting are probably George Peppard and Carroll Baker, they share a particularly poignant scene when he goes off to war, but Debbie Reynolds ties the whole thing together and she's full of snap and verve. The always welcome Thelma Ritter is a most amusing frontier woman. Shot on a massive scope this is enjoyable in any form but if you have the opportunity to see the Blu-Ray version on a large screen that's as near to ideal as you'll get. This film is what the movies are all about.

Any Western with this cast is worth a glimpse. Very interesting story of the American history on a grand scale. This movie in effect tells the fourth story - and tells it in a thrilling, colorful way - from the 1840s when the frontier was still the Ohio Valley to about 1885 - not so long a time. These stories brought two actors, Debbie Reynolds and George Peppard, in two of each stories. This is stunning - beautifully cast - music you'll always remember - and many powerful and moving scenes.

You have to hand it to everyone involved, this is one mammoth viewing experience. This covers generations as well as historical events like no other movie has attempted to do. I think the wisest decision was having multiple directors so each time period has a different feeling and vision. With a huge western ensemble, this is no short of fun to watch. Most of the known actors play some of their suited roles and serve as a time frame for the genre itself. What's interesting is that the segments get richer and more defined as they go along, rather than decrease in quality. Now this isn't a character movie in a traditional way, I don't even think there is a close up shot at all. However, this shows the progression of the west from a dream to a reality.

If ever there was a western or an epic that failed to live up to its name and disappoint altogether, it would be this film. How The West Was Won was one of the last of MGM's large scale epic films, which followed big budget successes like Ben-Hur and El Cid. It was also one of the last films to be shot using the Cinerama process, whereby three strips of film were shot with the intention of blowing them up on a large curved wide screen. As for the film content itself, I can't say that there is much here to be impressed with. The film is split up into five segments with connecting segments in-between. It tells the story of 19th century early frontiers, civil war and outlaws, as directed by John Ford, Henry Hathaway, George Marshall and Richard Thorpe (the last of which went uncredited). The main problem with the film is that the directors were not accustomed to shooting in the Cinerama process, and therefore, the film suffers a bit for it. The beautiful landscapes and cinematography of past John Ford works like The Searchers is completely lost in the process on this film. Although it does feature an impressive all-star cast, most characters in the film are not present long enough to give any sort of performance. Even though the film is over 3 hours long, it spends very little time with its characters in their particular environment before moving on to another segment or action set piece. You get to know them very little, and therefore, care very little about them. You would think with the likes of Jimmy Stewart, Gregory Peck, Henry Fonda, Debbie Reynolds and John Wayne that you would have a remarkable story. Alas, you don't, at least not in this film. Each actor makes little more than a cameo before the film moves on to another part of the overall story. I hate to suggest this, but in order to hold the epic scope of the story that the film was obviously trying to maintain, it should have been even longer...at least 4 to 5 hours total. Yes, it would have been outright embellishment, but I think it would benefit by keeping its stars on-screen longer and its story a little more focused. The film today has been enormously difficult to present on televison and home video. With Cinerama now obsolete, the three strips of film used to make up the Cinerama experience had to be combined and presented in the now standard widescreen format. Faint bars from the combination of the three strips of film are always present during the film, often being the most apparent during the brighter outdoor scenes. Otherwise, you tend to forget about them. It doesn't matter much though because the odd 'fish eye' look of the film due to it being laid on a flat surface is disconcerting and ineffective. Recently, the film was restored to its original Cinerama format and released on Blu-Ray. I haven't seen this release, so I cannot make a fair judgment on whether or not the original technical limitations of the format still hamper it after all these years. Overall, the quality of the film is mediocre at best. It did make a lot of money in its day, but unfortunately, doesn't hold up well with its look being a major turn-off to a cinephile like me.

How the West Was Won Quotes