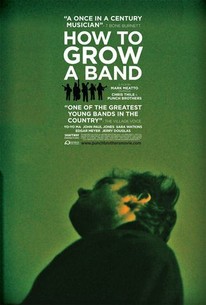 How to Grow a Band Photos

In How to Grow a Band, 26-year-old Chris Thile is at a crossroads. His marriage has ended, and his platinum-selling band, Nickel Creek, has gone on "indefinite hiatus." But Thile, a perfectionist prodigy who's defied expectations since he learned the mandolin at age five, has a plan. Step 1: Write a 45-minute, four-movement elegy to your failed marriage to be played by a bluegrass quintet. Step 2: Recruit the only musicians around talented enough to play it and crazy enough to sign on. Step 3: Make a record, launch an international tour and brace yourself. Filmed with uncommon access, How to Grow a Band provides a rare look at the start of one of America's most promising young bands and explores the tensions that test young artists: individual talents and group identity, craft and commerce, innocence and wisdom. -- (C) Official Site

News & Interviews for How to Grow a Band

View All How to Grow a Band News

Critic Reviews for How to Grow a Band

Mr. Meatto's framing tends to catch the musicians' give-and-take, merging and dueling notes onstage, especially at a Manhattan concert that is the film's highlight.

How to Grow a Band is most fascinating as it tactfully charts the sort of artistic and philosophical differences that can eventually undermine any group endeavor, even among seemingly like-minded collaborators.

How To Grow A Band maintains a respectable distance from its subject that ultimately doesn't work in its favor.

A fly-on-the-wall case study in the demands of making music for a living.

The movie is unsurprisingly devoted to peddling up-and-comer Chris Thiele as something daring, something new.

There are are scenes in Mark Meatto's documentary, How to Grow a Band, about the progressive bluegrass band, Punch Brothers, that seem to be straight out of Almost Famous.

Mark Meatto's How To Grow A Band is masterful filmmaking that takes the audience where they need to go.

[H]as a promising story to follow [but] disappointing, either as an introduction to progressive bluegrass or for longtime Thile fans.

In the end, you come away knowing almost as little about Chris Thile and his music as when the film started...misses its chance to enlighten, choosing instead to promote.

Fans of the progressive-bluegrass prodigy Chris Thile will enjoy this look at his stripped-down struggles to introduce audiences to his new avant-garde fusion of bluegrass and classical.

Audience Reviews for How to Grow a Band

There are no featured audience reviews yet. Click the link below to see what others say about How to Grow a Band!

How to Grow a Band Quotes