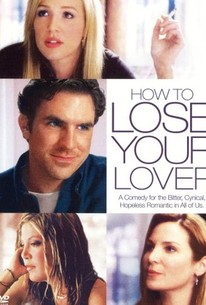 Owen (Paul Schneider of All the Real Girls) wants to be a serious writer, but ever since moving to Los Angeles, the only work he can get is co-writing trashy autobiographies for people who'd prefer he omit the unseemly truth, like Bucky (Fred Willard) an egotistical, philandering former astronaut. Owen thinks L.A. is keeping him from achieving his romantic and professional goals, but he can't bring himself to leave. After a big earthquake inspires Owen's manipulative, unfaithful ex-girlfriend to tell him she wants nothing more to do with him, he finally decides to get out of town. He arranges to write a bio for a Princeton physicist, and he tells all his friends and acquaintances the brutal truth, so that he won't be tempted to stay or come back to L.A. He tells his friend and housemate Rob (Dorian Missick) that he can't stand his girlfriend. He admits to Stephanie (Tori Spelling) that his other housemate, Allison (Poppy Montgomery), has always found her attractive, but he neglected to tell Stephanie this because he doesn't like her. But he can't bring himself to say anything unpleasant to his promiscuous bisexual best friend, Allison. Owen is at the airport, ready to board his flight, when he runs into Val (Jennifer Westfeldt of Kissing Jessica Stein), an attractive acquaintance of his ex. She's seeing off her ex-boyfriend, and invites Owen to have coffee, causing him to miss his flight. There's an immediate attraction. Owen is still determined to leave town, and now no one wants him around, but he has to take a few days to prove to himself that things would never work out with Val. How to Lose Your Lover, the feature debut of writer/director/producer Jordan Hawley, had its world premiere at the 2004 Tribeca Film Festival.

Sunny Lim
as Stewardess
View All

Critic Reviews for How to Lose Your Lover

There are no critic reviews yet for How to Lose Your Lover. Keep checking Rotten Tomatoes for updates!

Audience Reviews for How to Lose Your Lover

Great film! Paul Schneider is fantastic in this movie!

How to Lose Your Lover Quotes